Ma.gnolia is a social bookmarking website, making it easy—and pleasant—to publicly and privately submit links to interesting websites and articles, tag and rank them. They do a lot of things right, including a permanent link for each individual bookmark, so that I can link directly to it if a comment someone makes needs responding to or pointing out. (Dare they add comments? 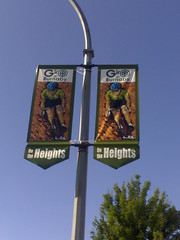 Next week, Criterium bike racers will convene in North Burnaby to participate in Giro di Burnaby. I was at last year's event, and it was pretty amazing seeing the speedy racers whiz by. I took some video using my cameraphone (each hosted by Amazon S3, so there are BitTorrent links as well, not that it matters really), as well as a few photos posted to Flickr. Looks like Terry Power posted some photos as well. I added the event listing to the Urban Vancouver events calendar, so it will show up in the upcoming events listing when the time comes closer. This year, I have a much better camera (a Canon EOS Digital Rebel XTi in addition to the Nokia N70 I took photos and video with last year), so this will be my chance to take some higher quality photos while figuring out how to capture fast-moving objects.

After some initial confusion about the location of tonight's DemoCamp Vancouver, we all made it to the Irish Heather to hear about the iPhone, co-housing, a Facebook application for bus schedules, and tracking the movements of people while they visit a site. And then networking ensued, at least presumably, since I left after the demonstrations.

This morning, instead of working from home as I had promised, I ducked out to ride around my neighbourhood for a half hour before the deluge predicted by Claire Martin. A half an hour turned into an hour and a half, and took the route that I decided will be the route to work. Mostly downhill, and not scary downhill like Union which levels off just as it crosses with Boundary. And under the Second Narrows Bridge. 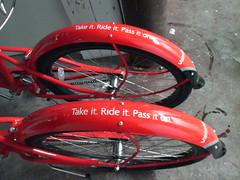 From Rob Cottingham and others, comes a link to the Vancity Bike Share experiment. The basic idea is that Vancity gives me a bike, I keep it for about 3 weeks, write about it on ChangeEverything.ca (and here, of course), then give it to someone else. 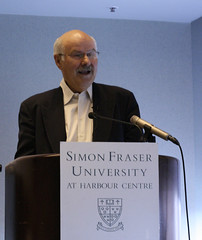 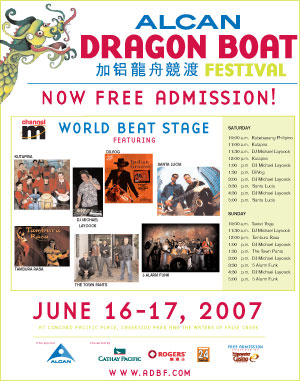 Readers of Urban Vancouver know that I've been playing floorball, a type of floor hockey with modifications like shorter sticks with golf club-like grips, a whiffle ball, with rules that emphasize stickhandling and playmaking over physical toughness. I'd only heard about the sport a few months ago, but the people are really friendly and encouraging, and though play is a little more 'lower-body' than I anticipated, it's a nice compliment to the primarily 'upper-body' sport of dragon boating.

After the BC Federation Floorball challenge a few weeks ago, I was getting a little discouraged with goal-scoring, but after last night's play, scoring on the final play of the final game, and feeling a lot better about my defensive play, I've gotten over any doubts I might have had about enjoying floorball. One of the organizers noticed an increase in velocity on my shot—though we'll see how accurate I am under pressure—and going the almost the whole night without water makes me wonder if my fluid intake is way more than it needs to be.