Daniel (or Henrik) Sedin Will You Marry Me? 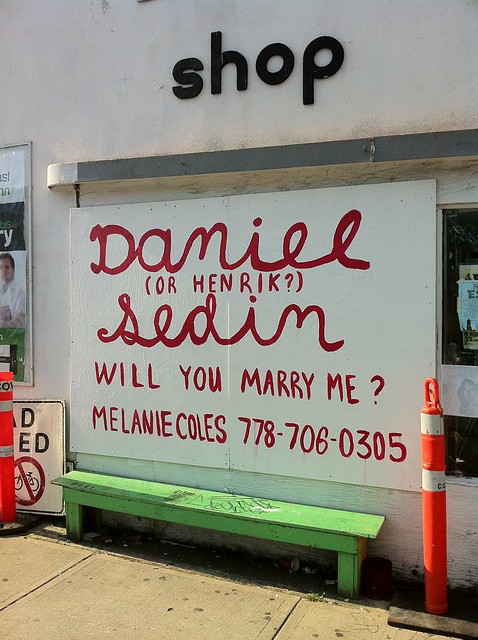 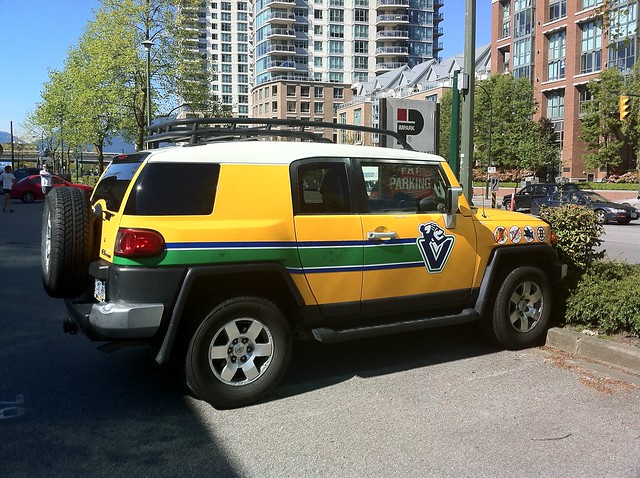 Why the assumption that the Boston Bruins will beat the Tampa Bay Lightning (above the front tire)?

Inaccurate assumption. Everyone knows the Lightning are going all the way. :P 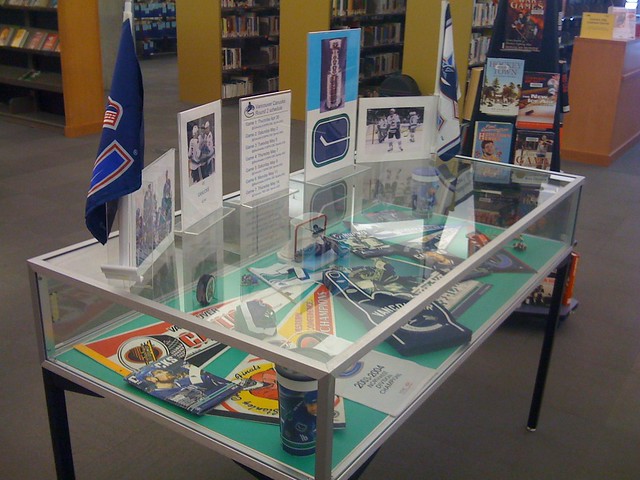 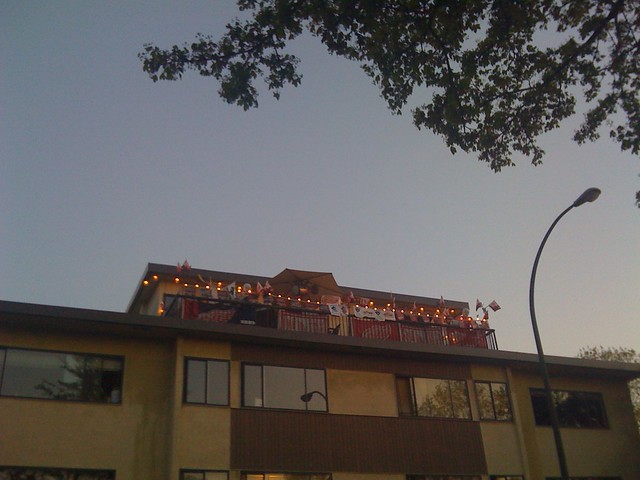 The only other Red Wings fan I've even heard of in B.C. was my brother, and now his "other team" is the Habs.

An interview with "cyclist" Trevor Linden →

The interviewer, Amy Smolens, namedrops a guy I went to high school and played on the basketball team with, Geoff Kabush.

The list of podcast episodes as yet not listened to has swollen to 70 thanks in due to spending most of last week in Windows as well as having lost my iPod earphones on the plane. (WestJet didn't have them in the lost & found, which surprised me a little, their having raised my hopes by being otherwise generally awesome.) Not to mention I didn't write an update last month. No earphones meant no listening to podcasts while in transit, which is no excuse, since I still have ironing and bill-paying.

I added no podcasts since last time, and even unsubscribed from one, ChinesePod. It was time to admit that despite intentions to do so, I was never going to get around to listening to them. Too much going on in my life to pretend to even have the time to continue learning Mandarin.

It pains me to say this, not having anywhere else to listen to great Canadian music, and knowing people who work in production for the show, but it must be said: I skip the talking bits of the still excellent CBC Radio 3. At least they put those in chapters within podcasts to make it possible: KEXP, can you please do the same? The latter has no talking for their awesome song-of-the-day podcast, so I've moved a few to my regular iTunes Library. "Convert Selection to MP3", despite the podcast already being in MP3 format, is your friend.

More than a day's worth of CITR's The Jazz Show, an afternoon's worth of KEXP's Sonarchy Radio, 6 hours (!) of The Crazy Canucks and a half hour of Planetizen Podcast wait for me to work through. But to Dave, who knows my usual response to his notification of a new podcast is to tell him how behind on podcasts, as with everything, I am completely up-to-date on The Canucks Outsider. 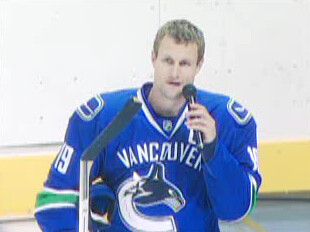 A screenshot of the live stream. Initial reaction: "Really?" Be sure to see Miss604's coverage of the new Canucks uniform for links and commentary.

Hey, everything is good about it. Except maybe the "VANCOUVER" part.

Fails at just about every level.

Do they even bother to focus group these things? Or do they just run it by the other people in the marketing department?

better than it was...but not up to The Stick. I agree w/ Joe on the "Vancouver"...a bit too baseball/basketball

there is *alot* going on in this new design ... rather cluttered and indecisive methinks

I think I would have been fine with a combination of 2 out of the 3 main elements: either

VANCOUVER + orca logo no matter what colours are too much. I'm all for breaking the rules when it makes sense, but the city name on the home jerseys is a good rule stick with. Team name at home, city name when on the road. They had to put the stick in rink logo somewhere.

Could be worse, could be bright yellow with a big V...

Yes, it is just a jersey and the hype on this has been unreal, but I am surprised (i.e., disappointed) in what they showed. The jersey itself is just a copy of their 1970s edition, their white socks are borrowed from the Hartford Whalers and the logo is the "buck shot method", with actually an attempt at two logos - the Orca and Vancouver - being placed together. They didn't even think about trying to make one smaller than the other so at least one could be the focus of attention. Just slap both Vancouver and the Orca together to compete side by side. I agree with filmgoerjuan; it does make one think they just ran it by their own team over coffee during a meeting on ticket prices.

Guess it was expected - I have always had a soft spot for the team but in reality no other organization has had more crazy experiments on their uniforms than the Canucks. Now it appears they can add "lack of creativity and simplistic design“ to "wild looking", "bright and gaudy", and other choice comments they received over the years to their designer's resume.

Let's hope their new uniforms do for them on the ice what the new unis did for Anaheim last year at least.

At least it's not vertical striping.

The "VANCOUVER" + orca combo looks sharp on T-shirts though.

what an awsome jersey and pic of Naslund :D

I'd rather Markus was wearing nothing at all he's yummy 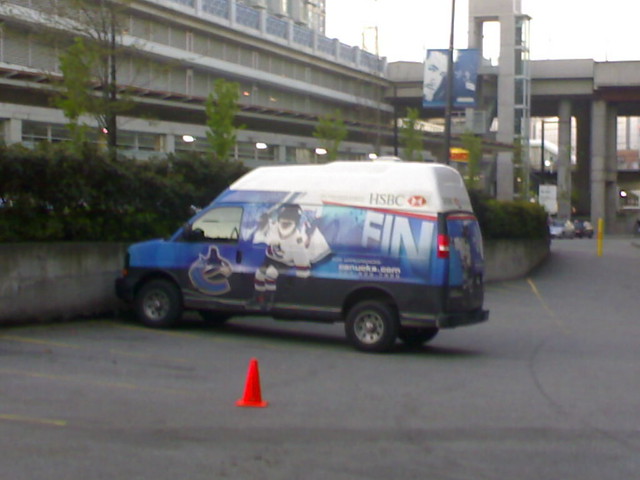 It only then occurred to me that "Fin" means "End" in French.

I'm not really taking it hard. I was just wondering to myself how many people thought that it was funny that the mascot is representative in an unintended way. I'm a little sad that my favourite team is out of the playoffs, yes, but now we Vancouverites get 3 more hours of sunlight.

I think its pretty astute of you sillygwailo. 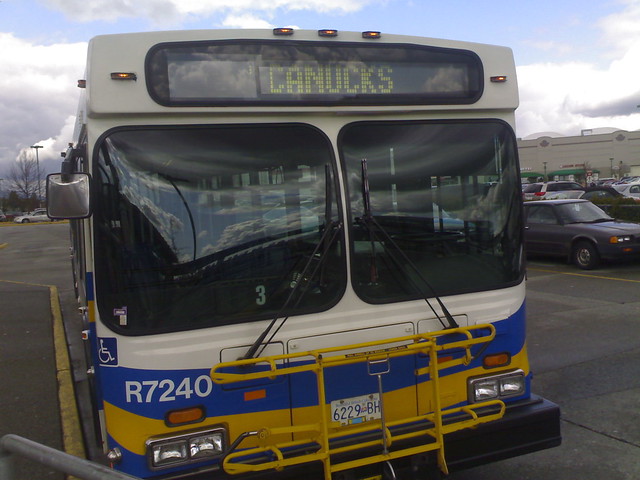 This was the 25 bus from Brentwood to UBC (that's right, the Yvan Cournoyer bus!) which couldn't fit "Go Canucks Go" so it scrolled through "Go", then "Canucks", then "Go", then the bus route, "UBC".

Hey! That's my Bus! At least some of the time! 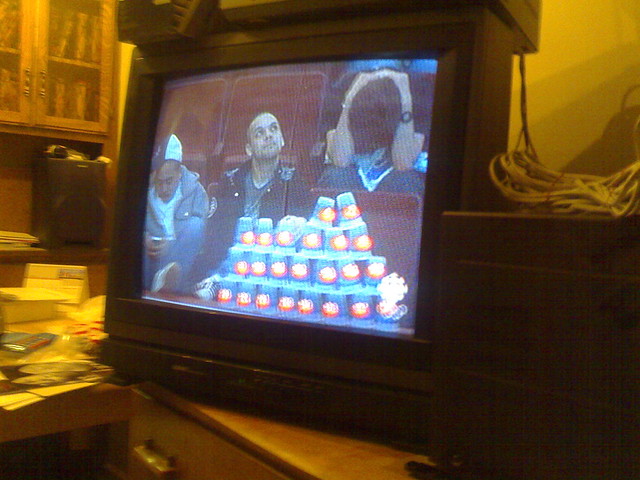 Clearly both the people involved in creating it and the CBC were clearly looking for something to do in the 4 overtimes that it took the Canucks to win it.