As part of WOMWorld Nokia, my friend and mobile technology aficionado Roland Tanglao offered to lend me a Samsung Focus with Microsoft's mobile operating system on it for a weekend. I took it around Vancouver, installed apps, took photos, tracked a walk on Commercial St., and, breaking with tradition, actually made a phone call. 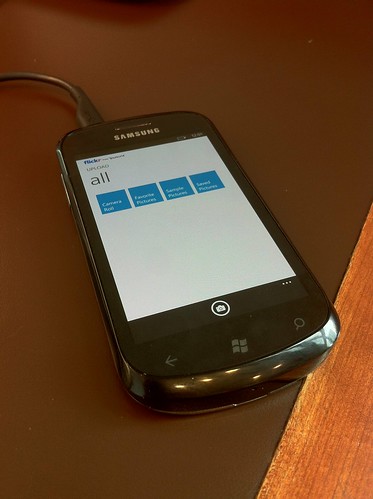 Over the course of four days, I installed the following apps through the Windows Phone Marketplace, listed here in alphabetical order: 1Password, Facebook, Flickr, Flux (Google Reader client), Foodspotting, Foursquare, Netflix, Public Transit (wrapper for Google Transit's website), Runkeeper, Shazam, Stacks for Instapaper, Twitter and YouTube. I resented having to install software to watch YouTube videos, and found the Flickr client incredibly slow. I was grateful that 1Password existed to access my 490 unique passwords, but was disappointed the app did not follow many Windows Mobile Phone 7 app conventions (tapping the hardware search button took me out of the app to Bing, for example). I was generally pleased with the other apps, especially the simplicity of the Twitter app and, compared with 3 years of iPhone experience, the completely different paradigms of Foursquare and Flux, to take only two examples.

I spent no money on apps, instead relying on either free or trial apps. Instapaper requires a $1/month subscription to its service in order to use 3rd party apps, so I bought the minimum 3-month subscription. I would have loved to try out the MLB At Bat™ app (since I'm a big fan and guaranteed buyer of the iPhone app; go on, Major League Baseball, keep raising the price, I'll happily keep paying), but a limited time with the phone didn't make a $11 purchase seem like a good idea. If I owned the phone, it would have been not only the first purchase but first app installed. 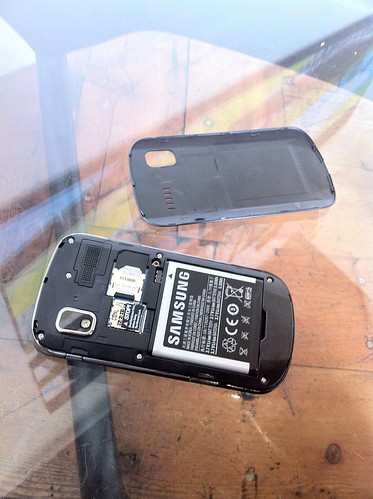 What I merely liked: 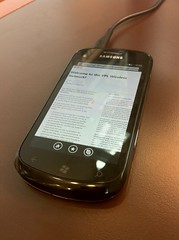 I liked the camera, but found it hard to get a non-blurry shot a little too often. For my comparison shot, I went to Caffe Rustico on Main St. and took a photo of their couch area with my iPhone 4 and from the same spot with the Samsung Focus. Not a huge difference to these eyes. The iPhone 4 had a wider shot and, with the HDR setting on, shows more in the window than the Samsung Focus.

What I neither liked nor disliked, but found weird:

What I absolutely hated:

If I had more time with the device, I'd happily buy some apps, starting with MLB At Bat™, then Flux, then Stacks for Instapaper. I'd be very happy with the software and very unhappy with the hardware. Can I have an iPhone with Windows Phone 7 on it?

Taking out the iPhone 4 SIM card 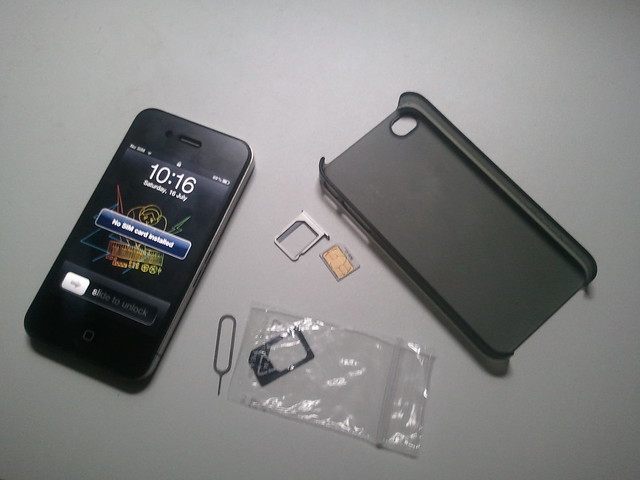 sillygwailo added a note: Micro SIM card adapter from microsim-shop.com/ I bought it in case my iPhone bricks and I need to use a phone with a regular SIM card slot.

sillygwailo added a note: This photo was taken with a Samsung Focus. Blurry, and this was the best take.

sillygwailo added a note: Incase Snap Case for iPhone 4, free from Apple thanks to Antennagate.

sillygwailo added a note: Apple brand "paperclip", which I always put back in the box for fear of losing. 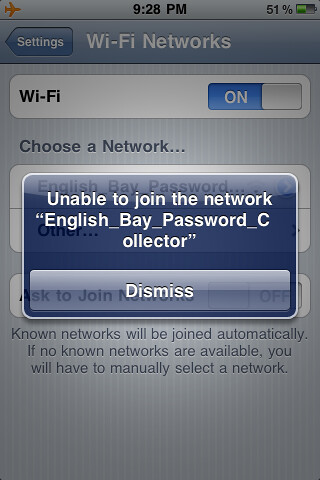 Followers of @justagwailo, my automated ephemera Twitter account, know that I'm a frequent user of a service called Brightkite. Brightkite is a social web application that lets people check into physical locations with the intention of socially interacting online. With Twitter integration (you can have checkins, notes, and photos automatically post to Twitter with customizable text), it's an "where I'm at" application which also shows you who has checked in nearby. You can get SMS notification of nearby Brightkite users, and even set privacy settings so that only friends see your exact location and others see a more general city or municipality as your current location. The Brightkite iPhone app makes checkins easy, giving you the option to search for something if it isn't in the "pick a place" listing, using the built-in GPS to find out what's nearby.

(I should note that I'm in no way affiliated with Brightkite. I'm just a frequent user.)

In a couple of weeks, Vancouver will host the Geoweb 2009 Conference, though I won't be attending. I would like to invite those who use Brightkite in the Lower Mainland, as well as people who are interested location-based online social interaction tools to join me at The Irish Heather at 7:00 PM on the 28th of July. (That date conveniently happens to be my birthday.) I'd be interested in doing a short introduction to Brightkite, and talk about the future of location-based online social interaction (one word: games).

I see Brightkite as an interesting way to explore a city and expand people's social network. I can also see roadblocks to the effectiveness Brightkite and its ilk, and would like those interested in discussing mapping, social activity online, and collaboratively mapping the world to join me in a week and a half to see where things are going.

Did I mention I'll have Brightkite t-shirts and stickers to give away? RSVP at the Yahoo! Upcoming event listing (understanding that the address is 212 Carrall, not 217 as listed there).

If we are to believe in timestamps, on October 7th, 2006, I took over maintainership of the Mobile theme for the Drupal CMS. At the time there was no iPhone, and stripped down graphics-free versions of websites made it easier for people with small screens on their phones to get to the information quickly. Now, relatively larger screens coupled with effectively unlimited data plans make websites more consumable by tiny devices. My maintainership of the theme continues unabated, as today I (finally) released official 1.0 versions for Drupal 5 and Drupal 6, and dropped official support for the 4.7 version. m.justagwailo.com serves as the Mobile theme's demonstration site. Thanks to Bèr Kessels for originally writing the theme and webschuur.com for its original sponsorship.

As with any software, there are <a href='http://drupal.org/project/issues/mobile?categories=All">feature requests and bug reports, and I encourage anybody using the theme to give me feedback there. The theme is not to be confused with the Mobile Theme module, which cleverly detects whether a browser is a mobile device and serves up a "mobile" theme for that device. I have the combination of the Mobile Theme module and one of two iPhone-friendly themes at PDXphiles, my Portland-lovers blog. 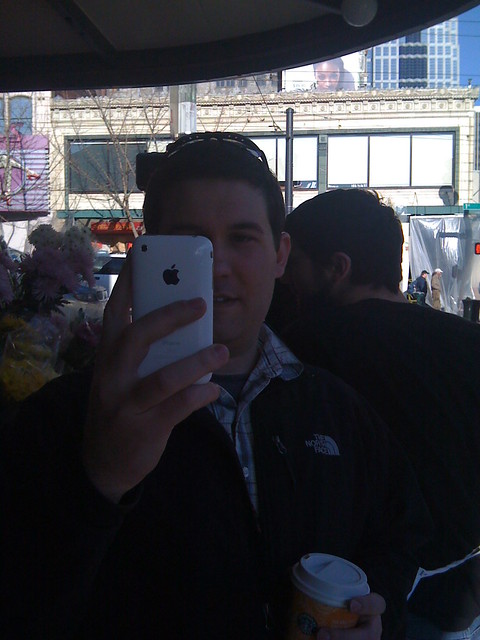 We've bought the tickets, so it's official: Karen and I will be going to Portland for the last week of February, then take a very short side-trip to Seattle on the way back. We're taking the Greyhound bus down from Vancouver, B.C., so we'll get a lot of Interstate 5 goodness. Since we didn't know exactly how we were getting back from Seattle, we decided that at least on the way from PDX to Seatown that we'd take the Amtrak train. A little more expensive, and the Amtrak guy in Vancouver wanted to see our passports. We managed to convince the ticket agent that we didn't know we needed them to buy tickets and that we had just made the decision (both true), so we'll finally be able to do as Djun did in 2005.

We very tentatively decided to neither of us bring our laptops, the idea being that we'll find enough computing power with friends and cafes to check our email as much as we need to and that's it. I'll bring my iPhone, which I'm assured by the fine folks at Fido will cost me an arm and a leg to use the data plan while roaming in the United States. As part of our trip budget, I have an amount of total usage in mind. Again, friends and wifi in the wilds of PDX will get us jacked in when we need to.

To update my thoughts on the PDX Bus iPhone application, the developer today had approved a 2.0 release of the app, which embeds Google Maps inside the application. It also adds a flashing screen to make it easier for TriMet bus drivers to see you. I didn't believe that TriMet actually recommending this, but the transportation agency itself has an explanatory video, including asking for what are called in Vancouver "request stops", i.e. getting dropped off anywhere along the route, not just at designated stops. 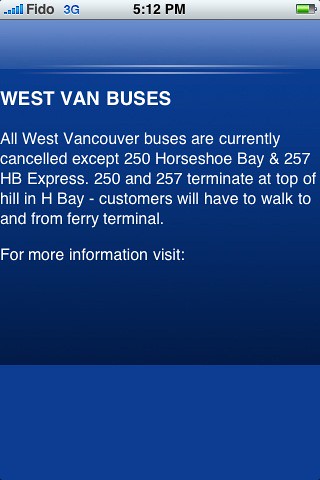 Not quite correct, I'm currently on a bus boarded at the ferry terminal the time this screenshot was taken.

I was in Hawaii on this day, and yet part of me wanted to be back home to photograph the snow and its chaotic effect. 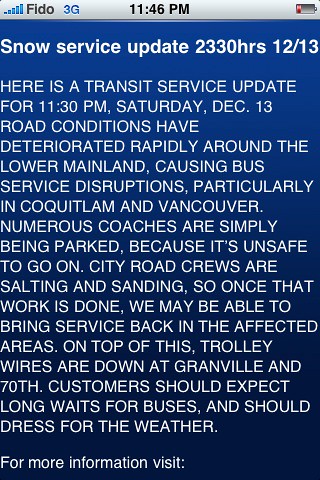 I liked the informative update. I didn't like the all caps text.