(R)evolution Will Not Happen on the Sidewalks 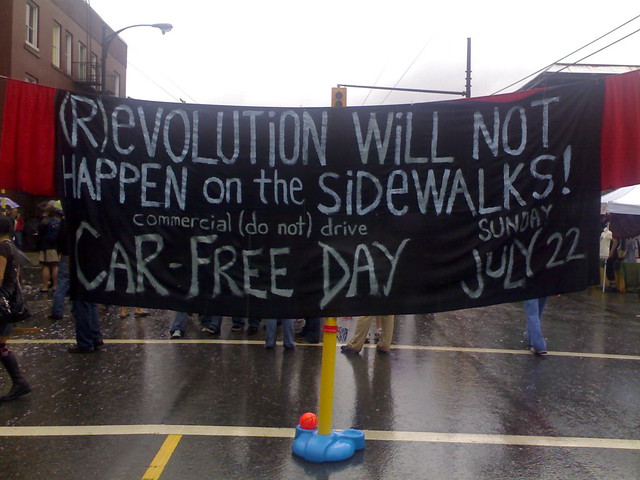 Rudy Rucker's third chapter of The Lifebox, The Seashell, And the Soul tackles evolution as computation and the possibility or artificial life (which he shortens to a-life). Of the three so far, this is the most accessible, talking about activators and inhibitors (relating them to ideas and their spread), and later in the chapter, cellular automata algorithms used to produce what look like trees. Most compelling, however, was his discussion on search method algorithms, though as a computer geek, I had to remind myself that he did not limit himself to search engines as we know them on the Internet but the ways and the feasibility of the ways we as humans and potential artificial life system would search for the solution to a problem. He distinguished between best solutions and acceptably good solutions, because it's far more efficient, not to say worthwhile, to find the acceptably good solutions over best solutions, because the later most often means you have to search through all possible solutions:

The fact is, given a large enough search problem, none of our various search methods is likely to find the absolute best solution with a feasible amount of time. But so what? After all, absolute optimality isn't really so critical. In any realistic situation we're quite happy to find a solution that works reasonably well. Nature is filled with things that work in clever ways, but it's a delusion to imagine that every aspect of the biome is absolutely optimal. Surely we humans don't have the absolute best bodies imaginable, but—hey—our flesh and bone holds up well enough for eighty or so years. We do better than our rival apes and our predators, and that's enough.

Nearer to the end he quotes at length from his novel The Hacker and the Ants, about a scenario in which software developers create virtual worlds in which their simulated robots compete amongst themselves in virtual environments. I imagined several homes in The Sims, with robots instead of humans, evolving in houses each slightly different but covering all the possibilities of combinations within those homes, the robots having descended into complete anarchy. I haven't read any of Rucker's novels but they can be found at the local used bookstore, so it's about time I got my hands on a few, since if he uses scenes from them to prove a point, he must think that they have stood the test of time reasonably well.

It is simply creationism camouflaged with a new name to slip [...] under the radar of the US Constitution's mandate for separation between church and state. Also: When two opposite points of view are expressed with equal intensity, the truth does not necessarily lie exactly half way between. It is possible for one side simply to be wrong.

Jim Holt: “if we can't infer anything about the design from the designer, maybe we can go the other way. What can we tell about the designer from the design? While there is much that is marvelous in nature, there is also much that is flawed, sloppy and downright bizarre. Some nonfunctional oddities, like the peacock's tail or the human male's nipples, might be attributed to a sense of whimsy on the part of the designer. Others just seem grossly inefficient. In mammals, for instance, the recurrent laryngeal nerve does not go directly from the cranium to the larynx, the way any competent engineer would have arranged it. Instead, it extends down the neck to the chest, loops around a lung ligament and then runs back up the neck to the larynx. In a giraffe, that means a 20-foot length of nerve where 1 foot would have done. If this is evidence of design, it would seem to be of the unintelligent variety.”

Richard Dawkins: “We observe large numbers of people, in many local areas it amounts to 100% who hold beliefs that flatly contradict demonstrable scientific facts, as well as rival religions. They not only hold these beliefs but devote time and resources to costly activities that flow from holding them. They die for them, or kill for them. We marvel at all this, just as we marveled at the self-immolation behavior of the moths. Baffled, we ask “Why?” Yet again, the point I am making is that we may be asking the wrong question. The religious behavior may be a misfiring, an unfortunate manifestation of an underlying psychological propensity that in other circumstances was once useful. ”

Dawkins then argues that the brains of the human children most likely to survive in Darwinian terms are hardwired to be unable to distinguish good advice from bad, especially when the source of the advice is a trusted grown-up. Like a computer, which follows instructions even if designed maliciously, children's brains become programmed to always follow instructions, or at least almost always.