Managing a Hyper-local Community with Drupal →

I disagree with 8, 9, and 10 ("don't allow anonymous comments", "moderate comments and/or posts", and "require user registration") as hard and fast rules, but I can think of situations where they might be necessary.

Ma.gnolia is a social bookmarking website, making it easy—and pleasant—to publicly and privately submit links to interesting websites and articles, tag and rank them. They do a lot of things right, including a permanent link for each individual bookmark, so that I can link directly to it if a comment someone makes needs responding to or pointing out. (Dare they add comments? But think of the spam!) Earlier this month, Alex Jones has been posting some excellent articles on how to maintain and promote Ma.gnolia groups. I've been administrating, gardening, and maintaining a few groups on Flickr and now on Ma.gnolia, and Alex's tips apply to all microcommunities built on someone else's community site. I wanted to take some time to promote the groups I'm heavily involved with, even though their membership is small and not likely to grow into overwhelming numbers.

Discovering that Ma.gnolia implements OpenID, making it easy for me to login without having to remember yet another password, that finally got me to move my over 2000 bookmarks from del.icio.us, which doesn't have the community features Ma.gnolia has like thanking for bookmarks (I like being thanked!) and it doesn't look nearly as pretty. Not that you need to look good to be popular (e.g. ILX, Craigslist), but it doesn't hurt (e.g. Digg). I can't imagine keeping up with a community the size of MetaFilter, which I rejoined, so if the little communities I created or am trying to create solve a problem for me and a few others, then I can feel like I've made at least a small contribution to the health of the Internet.

The tips apply to managers and administrators of other communities build on top of other people's social software (e.g. Flickr).

Why do people write free documentation? Results of a survey →

[A] motivation often voiced by contributors: they don't have the skills to write software for other people's use, but can make themselves useful through support and documentation. 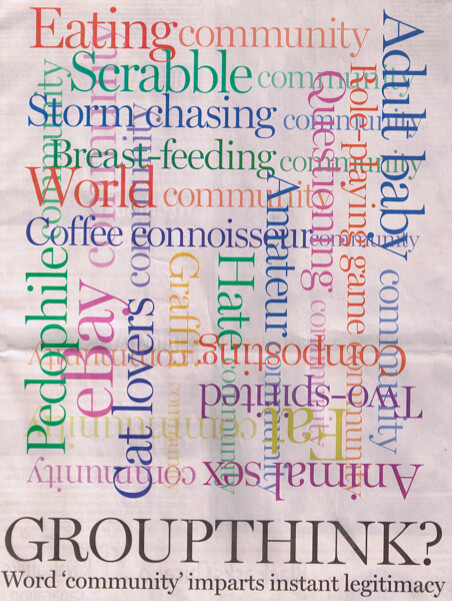 My husband does community programming.
We use this.
"Together we're building community one season at a time."
I found the link interesting.

I picked up a copy of that paper...

Noah Kagan on how to build an authentic web community →

Be involved with it already. Understand the community. Listen to them.

A few months ago, Jen announces she's one of the new writers at Metroblogging Vancouver, in addition to Jonathon Narvey. Making a note it of it at work, I said in our internal group chat something to the effect of "it's almost as if you have to make something appear like an exclusive club in order to get people to join." I was a little on the grumpy side when writing that, mostly because Urban Vancouver, which has free weblogs, forums and event listings for anybody who signs up, but I actually consider Metroblogging Vancouver to be a successful group weblog: the authors have different perspectives on the same thing, and frequently contribute interesting writing. Same goes for Beyond Robson, of whom I'm envious of their Vancouver's art and music scene coverage.

Among the reasons Urban Vancouver isn't a successful community site:

(Among the reasons Urban Vancouver is successful:

We managing editors have other ideas for the site, but it languishes a bit as we work on things that are a little more mission-critical. Something I've been struggling with is, working for a company that provides tools to build community sites, I haven't created a lot of them. Successful ones, that is. PDXphiles, improvident lackwit and even 43 Thongs are good candidates for opening up for user signups. (That last one is the least likely to open up: I meant it to poke a little fun at some guys who were creating services I actually use and like, so I don't ever want to feel like I'm competing with them using their sites' design.) Watching China and Translinked have open signups, but I don't give them enough attention or promotion for people to want to participate.

If you watch my reading about community, you'll see links to some great articles about the subject:

What if you created a community site and nobody came? That question rang in my head when reading the above articles and thinking about it consumes a sizable percentage of my day. I continually have to remind myself that using the technology is about 5% of the work you put into building a community site. Public and private promotion (online and offline), maintenance of the site, user and content moderation, facilitation, participant retention, and technical support, not to mention participating yourself by creating the initial writing, video, audio, what have you, and continuing to participate in the community after it takes off constitute 95% of the time you put in. Soft skills, but hard work.

Tranlinked may or may not succeed as a place where people can write about Vancouver transit issues, but maybe I have to think smaller. Starting in April of this year, I created a group for Vancouver transit on Flickr for the sole reason that it didn't exist yet. Watching the 'translink', 'seabus', 'skytrain' tags, I politely ask people if they want to post their photos there (trying not to tell them what to do; that's a personality thing, but personality has a huge impact on the success of a community). I have quietly—via private messages, which felt more personal than leaving a drive-by comment on their photo—been building a small but already-passionate community using someone else's service. By piggy-backing on a photo-sharing community site I could carve out a niche for myself and others who think public transportation is an interesting aspect of their city.

In other words, I don't really have to build a community site or even a community: communities are usually already there. They just need a place to hang out and feel like belong to a community.