Last night I spent about an hour going through photos on Flickr tagged with 'skytrain'. (At some point I'll move on to another obsession, but until then... ) Not to be mistaken with photos of the elevated light rail in Bangkok with the similar title "Skytrain" (note the miniscule 't'), only ever having taken the Vancouver system, I had gone through the photos wondering which were the best ones. The ones I liked the most fit into two categories: photos of tracks and photos of blurry trains and/or tracks as the trains were in motion, using long exposures as well as a copule of photos of empty SkyTrain cars. Here are the highlights, with people I know personally disclosed. 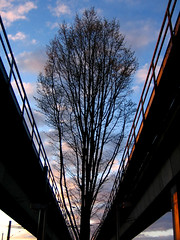 The award for most interesting thing done on SkyTrain (other than kissing, of course) has to be playing board games (from another perspective).

Photos I missed, including photos submitted to Flickr after I originally posted this:

your webpage is cool!