Most of the time, I read the reviews only after seeing a movie or a play. A review in The Georgia Straight of Morris Panych's production of Waiting for Godot at the Stanley Theatre here in Vancouver decidedly gives it a thumbs-down: “the stakes are so low on every front that there's virtually no reason to watch. The script tells us the tramps are subsisting on root vegetables and even those are running out. Arguably, they are starving, but in this production, when Estragon asks for the bones Pozzo has discarded from his ostentatious picnic, he doesn't even seem hungry. The text makes it clear that Vladimir and Estragon are painfully ambivalent about their relationship to one another; they are desperate to escape its tedium but terrified by the thought of losing its small comforts. When they talk of parting, it should be a big deal. Here the feeling rarely goes deeper than petulance.” The reviewer, Colin Thomas, says that Pozzo and the child were the highlights, and I agree: except possibly for Estragon (“Don't touch me! Don't question me! Don't speak to me! Stay with me!”), Pozzo gets the best lines. My favourite, the one still with me an hour after the play, “all subsides”. A lot more active a tense than "everything is temporary", don'tcha think? 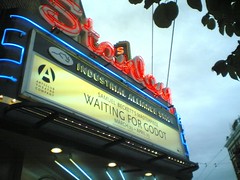 Darren Barefoot says that this is the best play of the 20th century, and he's a strong enough authority on the subject (20th century plays, that is) to make that claim. Me? I didn't get it. It's somewhat liberating to admit that. After watching the play, I walked a couple of blocks to the local Big Choice Bookstore, looking for the play—the written down book version—to add to my library, as I have for Rosencrantz and Guildenstern Are Dead (of which I've watched the DVD and the play last year). A young couple—both younger than me at least—who had also just attended the play, were looking for the same thing. The young woman was explaining to her guy what the play meant to her. She even compared the play to Death of a Salesman (which I haven't seen yet), saying that Godot represented hope, just like Lindsay Lohan's pants represented hope to teenage boys. She even suggested an updated version of Waiting For Godot called Waiting For Lindsay Lohan's Pants. That might actually sell a lot of tickets, more so than the two-thirds-full theatre on Granville St. this evening.

(I took some photos: the set, after the actors left the stage, the marquee at the Stanley Theatre, and the boots left on stage during the intermission. They didn't tell me not to take a photo of the marquee, so I'm not feeling guilty about that one.)

The reason I'm going to buy the play—and no, not read it on a computer screen—is that so I can pause and quietly reflect a little on what Samuel Beckett is trying to tell me. Then, if that doesn't work, I can read the introduction, which, like reviews, I always read after the work in question.

I think you under sell