Posted by Richard on Saturday, 31 December 2022

Some things have changed since I wrote about listening to albums in 2018, and some things have stayed the same. The two biggest changes are 1) having a much better listening experience thanks to new speakers and headphones and 2) listening to entire discographies (or, sometimes, "essentials" playlists) when a new album comes out.

One of my best purchases during the COVID-19 pandemic, spending so much time working from home, has been a pair of Sonos speakers. They're compatible with AirPlay, so I can play them with any of my Apple devices and they're a huge improvement over wired headphones and laptop speakers of my previous experiences. In April of this year, as a late present to myself after a promotion at work, I bought Sony's WH-1000XM4 headphones. I did a bit of research beforehand, and went to Toronto's Bay Bloor Radio. I was one of two or three customers in the store. The WH-1000XM4 headphones were on my list of headphones to try, and the salesman gave me them to try (unprompted) and another brand. The other brand didn't fit, and the WH-1000XM4 were "on sale" for $100 off (I didn't really care), and I liked everything about them. Having good headphones has led to me listening to quite a lot more music than usual, to the point where I believe 2022 is the year I've listened to the most music. As far Last.fm knows, that's definitely true: 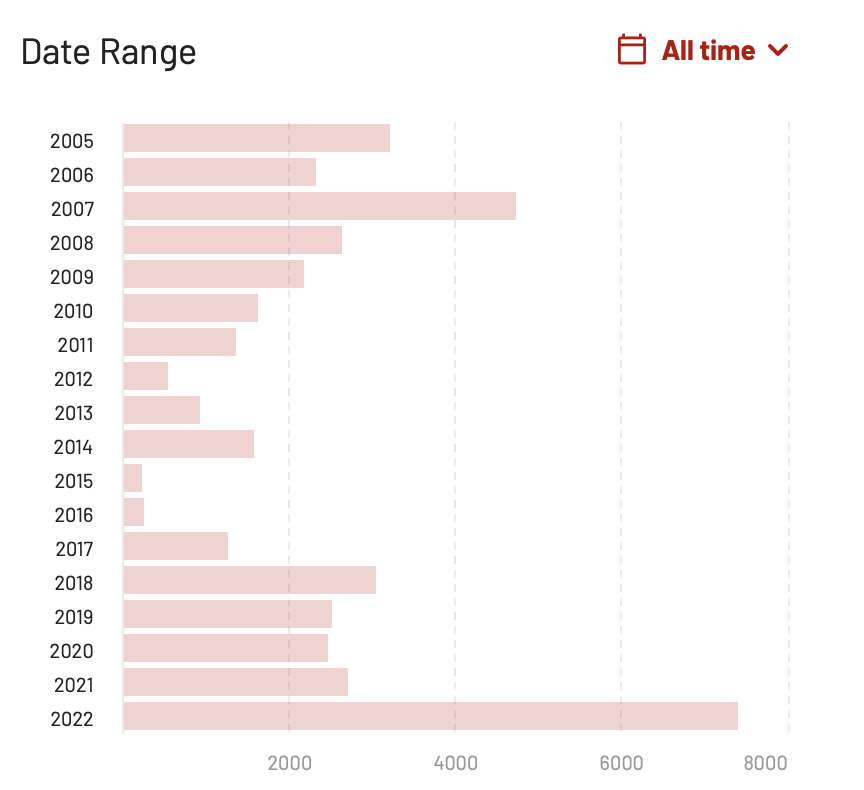 Last.fm has been around for 20 years. Wow!

Another change has been to listen to an artist's entire discography when a well-received new album of theirs come out. How can I tell if an album has been well-received? It gets a favourable review in Pitchfork, that's how. That's something that has remained the same over the years. How do I listen to an artist's entire discography? One album at a time, that's how. It can be difficult to track the albums down sometimes, as Apple Music doesn't always have all of an artist's albums, though they sometimes appear on Bandcamp, and, rarely, only on Spotify. Some artists are part of a collective, such as the Wu-Tang Clan, a longtime favourite whose concert I recently attended (minus Method Man, but also plus Nas and Ol' Dirty Bastard's son). They have, collectively, a lot of albums, so I listened to all of their albums from the 1990s (including the year 2000, which belongs to the 90s) and had to take a break. I'm still on that break.

I don't wear out albums like I did in my CD-listening days. Novelty, along with catching up on classic albums (the impetus for that being Pitchfork's Sunday Review series, are my two guiding principles to listening to music. I don't imagine listening to more music in 2023 than I did in 2022, but here's to trying anyway.

Time passes, and since the year flipped over, Last.fm calculated my yearly top artists, albums and tracks:

You’ll never guess why Bone Thugs-N-Harmony’s “1st of tha Month” was the top track I listened to in 2022.