Two Years of Sheltering In Place (More Or Less)

Over the last two months, we've seen the Omicron variant rip through the worldwide population and cause the Ontario government to close indoor dining yet again. That shutdown lasted about a month, rose tensions around the province, further elevated by the convoy of trucks that took over downtown Ottawa. Members of the convoy did attempt rolling through Toronto, but police had learned the lessons of our nation's capital and closed access to the downtown core, limiting traffic to those using muscle power and those who lived in the area. It was very eerie, and while some cheered, I was left with mixed feelings, since it felt like that was the goal all along. The federal government invoked the Emergencies Act for the first time, and I admit to being struck by how well it worked, and how quickly and easily the trucks and protesters were dislodged. I had heard all kinds of talk that they weren't leaving without a fight, that they outnumbered the police, that the police wouldn't have the guts to do it, but all that proved false after 48 hours of orderly removal of people and towing of vehicles.

Since then, I participated in a world record 14-level Ingress field, an operation which brought me back to my days in Vancouver when I would play the game more regularly. I'm currently at a 70-day streak of playing, so I guess you could say I'm serious about it again, and meeting new people as a result.

In early March, the Ontario government announced the removal of the requirement of restaurants and to ask for a vaccine passport, something I had done a few times (and noted which restaurants didn't check), and on March 21st, only a few indoor places will require people wearing masks. I will be carrying mine around with me for a while, since some places will still require them, notably events where people bought their events with the understanding that they would be sitting with vaccinated and masked people. Whenever I'm asked in a survey what a company should do about their mask policy, I say that they should honour what their customers expected when they decided to go. After that, if they want people to wear a mask, they should account for the people who didn't bring one not knowing what the policy was. The advantage of the government regulating it is you knew what to expect, and we'll soon go through a period of people, like me, being ready for whatever's asked of me. Since late February, the Russian invasion of Ukraine has sucked out the oxygen of the COVID-19 news story, and it has been rare since then that it has made front-page headlines, at least on the newspaper I subscribe to.

I did find myself surprised to feel that the government's announcement of lifting the masks requirement made it much easier for me to think about the future. I have a trip to British Columbia that I'd like to make in the late spring, and my pre-pandemic mega-trip plan (Kansas City, Las Vegas, Portland, OR and Vancouver, B.C.) seems a lot more realistic now. 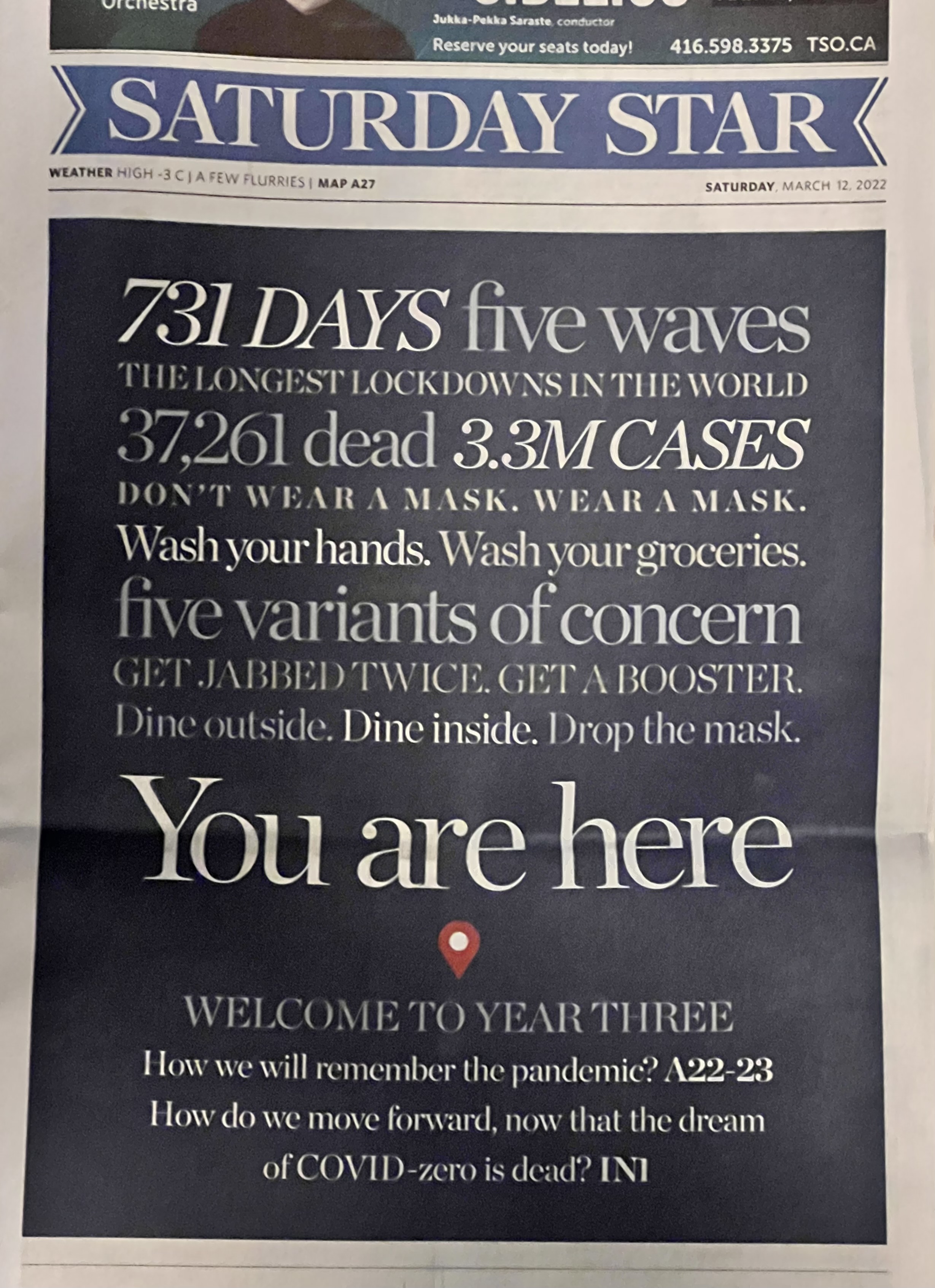 What did I learn in the last two years? Not as much as I thought I would. We found out about a lot of companies who relaxed their rates and policies in an emergency, which led to people wondering why they wouldn't do it in the first place. Beyond practicing mindfulness meditation every day for most of it, I didn't improve much as a person, not having taken on any new hobbies or restarted any old ones.

If I stopped blogging in 2019, the pandemic got me started again. I don't think I would have read Moby Dick or even read a chapter for the New Bedford Whaling Museum's Moby-Dick marathon if it weren't for the pandemic. I likely wouldn't have organized a travel show for the Icelandic Canadian Club of Toronto (and subsequently swore off organizing events). In recent months I finally decided to try cooking something outside of the usual Chef's Plate meal kits, trying my hand at two personal favourites, Singaporean curry chicken noodle (somewhat of a success) and Macau-Style Portuguese chicken on rice (so far failed). The pandemic isn't over, and if this year taught is anything, it's that we have some fits and starts left. I haven't been more optimistic that we can do things in a much safer state than we've ever been since it started, at least.