My first trip outside of Toronto's city boundaries since the start of the COVID-19 pandemic was this Friday, to Hamilton. The closest CEBL basketball team to Toronto, the Hamilton Honey Badgers 1, opened up their stadium to fans in the past week, so I took advantage by buying a ticket to Friday evening's game. I had a dentist's appointment in the morning, work after that, and a surprisingly busy afternoon, so I just barely made the 4:30 PM GO Train out of Union Station. My trips in previous years to Hamilton were by bus, and this was the first time by rail. I have a longtime preference of taking rail transportation when the option presents itself (I can't believe I live in Toronto, the downtown core of which is served by streetcars), so I was glad I took the opportunity this time. I wouldn't say it's the most scenic train ride in the world, but the entry into Hamilton is pretty epic, with great views on both the left and right as it winds its way into Steeltown.

I didn't have much time before the game to have dinner, so I was glad I knew my way around a bit from previous visits. I had the presence of mind to avoid a dive bar and land at Merit Brewery, which I knew had a good macaroni and cheese, though I'd forgotten just how good it was. And it's on the snacks menu! The only regret was that I didn't have time for a second beer there, as I had hoped to try their key lime sour beer.2 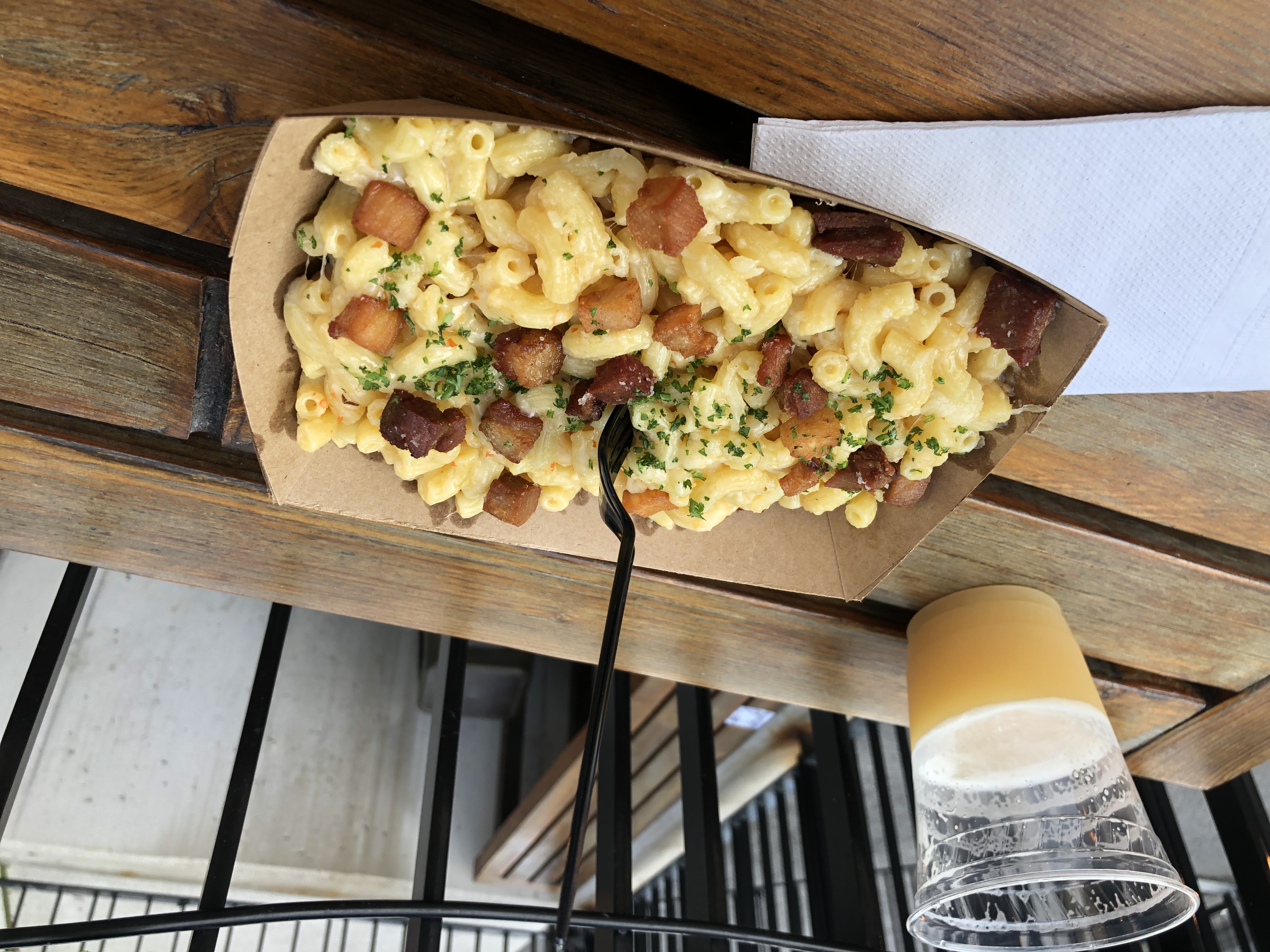 The game was fun! You had to wear a mask at all times except while eating, and seating was limited and spaced out, but the atmosphere was terrific. It was my second time seeing a Honey Badgers game at Copps ColiseumFirstOntario Centre, and it was a back-and-forth affair. My type of basketball. It concluded with an Elam Ending, where if a game is close near the end of the 4th quarter, an algorithm determines the target score, and the first team to that score wins the game. The game clock is turned off, and the ending eliminates the situation where the team that's behind in the score tries to foul to get the ball back. It's a common complaint about NBA games that, combined with the timeouts, 2 minutes of basketball can take a half an hour to play. The Elam Ending gives the team that's closely behind the team with the lead a chance to win, with an advantage to the team that is already leading. The risk is that a game ends on a free throw, but the easy solution to that is to not foul and send anybody to the free throw line in the first place. And if it does happen, the incentive is to stock a team's roster with good free throw shooters. 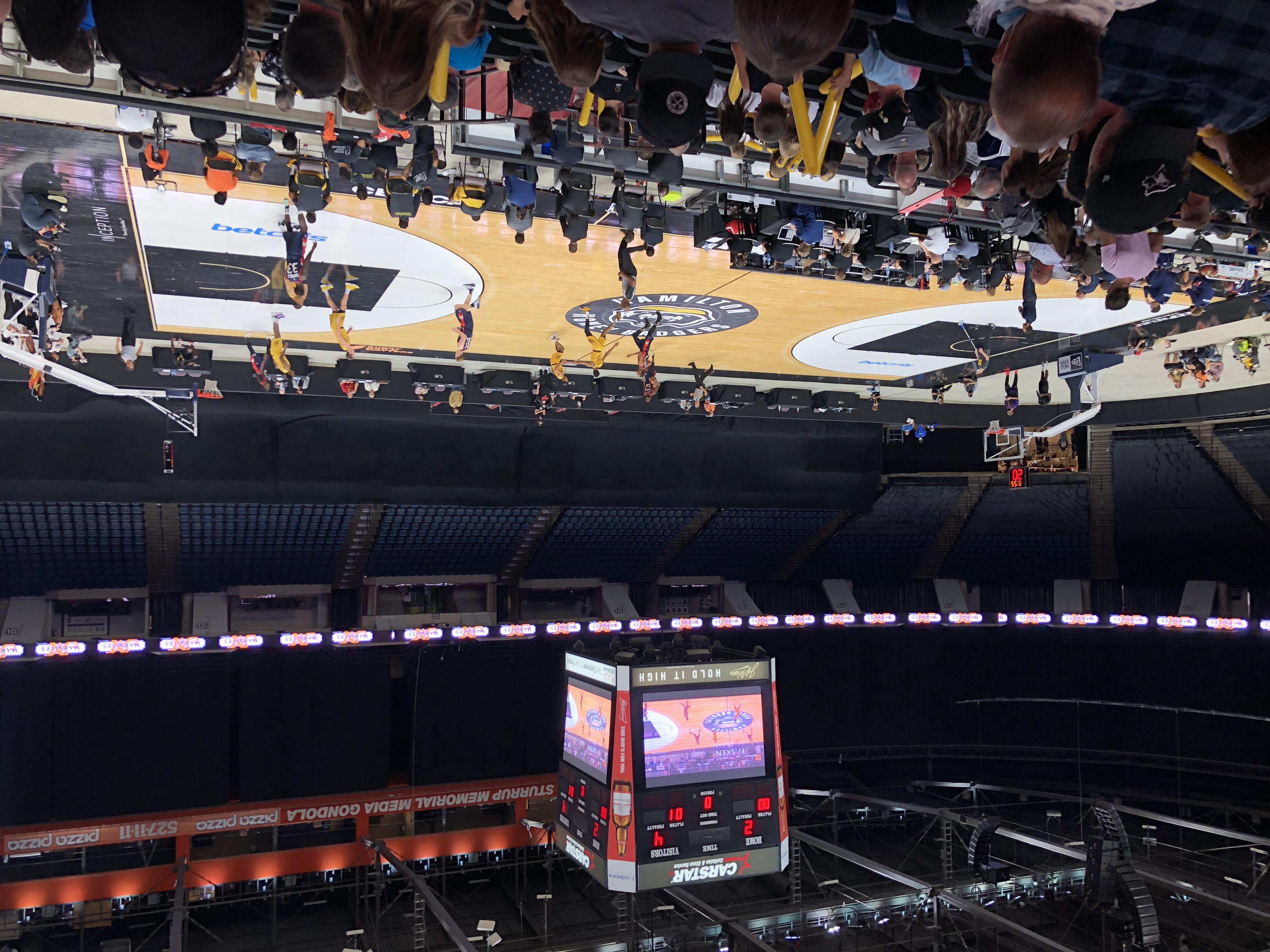 The Honey Badgers-Bandits game, it turned out, ended on a free throw, but in quite spectactular fashion. And controversial! (Or at least as controversial as a Canadian professional basketball game can get.) The defending Bandits player, on the free throw that would have won the game for the Honey Badgers, was blocked before it got to the rim. Initially the referees called it goaltending, but since no player seemed to have been in a game where that particular event happened, there was confusion on the court. The referees conferred, and the call stood. The Honey Badgers won! 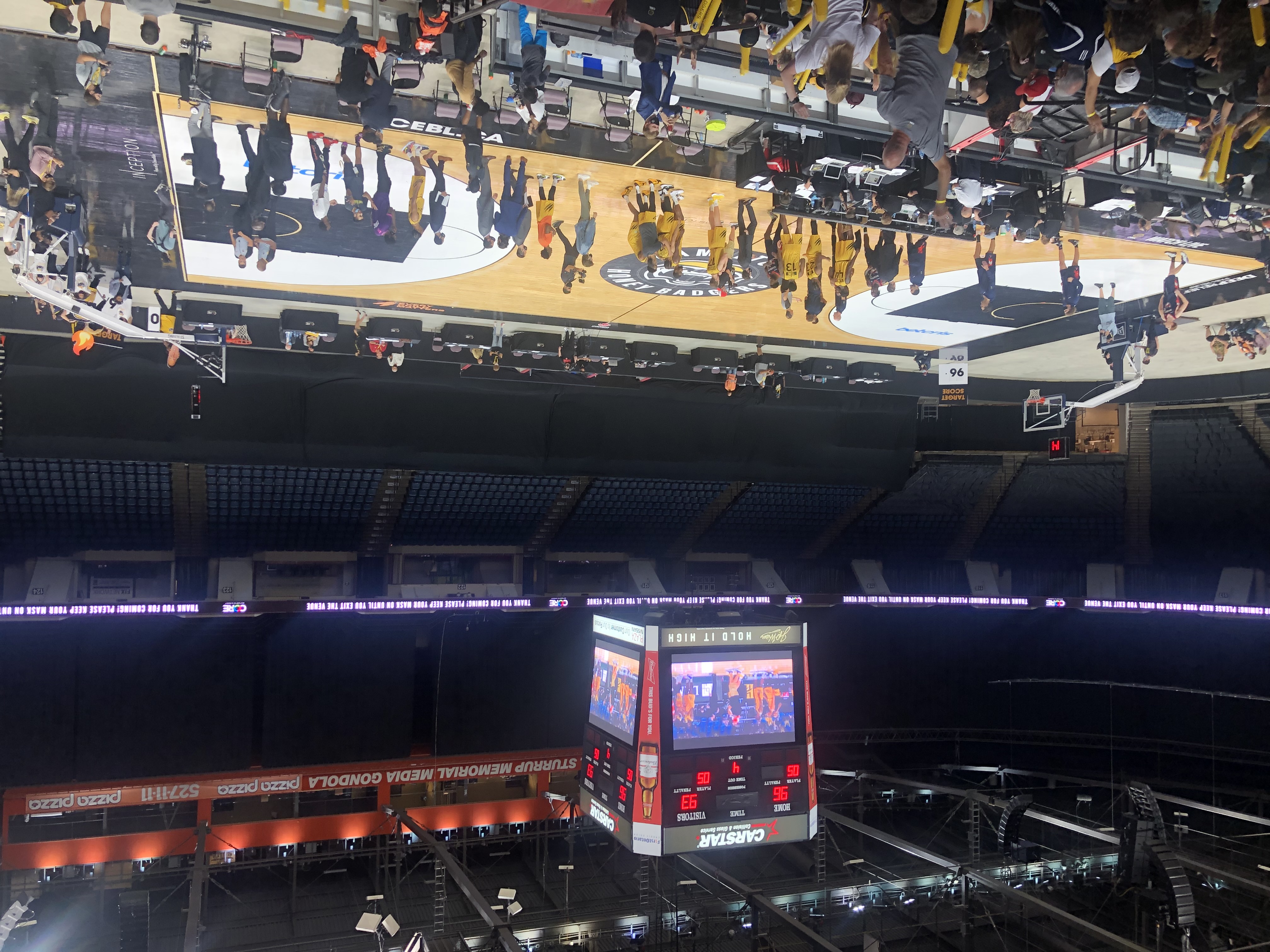 To get back to Toronto, my plan was to take the bus, but I seemed to have forgotten that the Hamilton GO Station locks its front doors after hours. After a moment of wondering whether I'd be trying to find a hotel room, I confirmed that indeed busses were still running, and boarded the 16 bus back to Union Station. While it took the freeway initially, I was surprised (as I was on each of my other bus trips to and from Hamilton) that it took detours, driving through Oakville and on roads running parallel to the 403 and the QEW. Road signs I saw along the way: Dorval Rd., Cornwall Rd., Trafalgar Rd., Sheridan Way. I was 100% sure we were going to Toronto, with just no strong sense about what roads we'd take to get there.

Arriving in Toronto, I got my first taste of the new Union Bus Terminal. I wasn't taking the subway home (I had already decided to walk), but I would definitely have asked the attendent directing passengers on how to get there if I had.

It was a pleasant evening trip. I'm hoping to spend more time Hamilton, including an overnight stay, since it's a place in the GTHA (along with Etobicoke) where I feel like I can breathe.