12 degrees Celsius and sunny during “Spring” in Toronto was the perfect weather to do a tour from the book Toronto Architecture: A City Guide by Patricia McHugh and Alex Bozikovic. Ontario lifted its "strict stay-at-home order" last month, so I no longer felt guilty about wanting to visit the neighbourhood adjacent to mine. Grange Park is a neighbourhood in downtown Toronto that feels like a neighbourhood, with mostly two- or three-level detached houses and apartment complexes (especially "The Village" on McCaul St.). It was striking to see a residential neighbourhood inside the downtown core that is 3 storeys or less for the most part. From what I gather about the cohesiveness of the neighbourhood, that's no accident.

This walking tour had me starting out in Grange Park, which acts as the Art Gallery of Ontario's backyard. Today I saw a busy dog off-leash area and a number of small groups of people taking advantage of the sunlight and cool breeze. (I can't get agitated about the safety of outdoor groupings during a pandemic because there have been so very few cases of COVID-19 associated with visiting in the most ventilated place possible.) Before I could get to the park, however, the horns of the legendary Big Smoke Brass band performing lured me to Soho and Queen, where I heard covers of funk Lettuce and TK Having not attended a concert in quite some time and having been looking for a way support live (in-person) music, I dropped $20 in the donation bin. 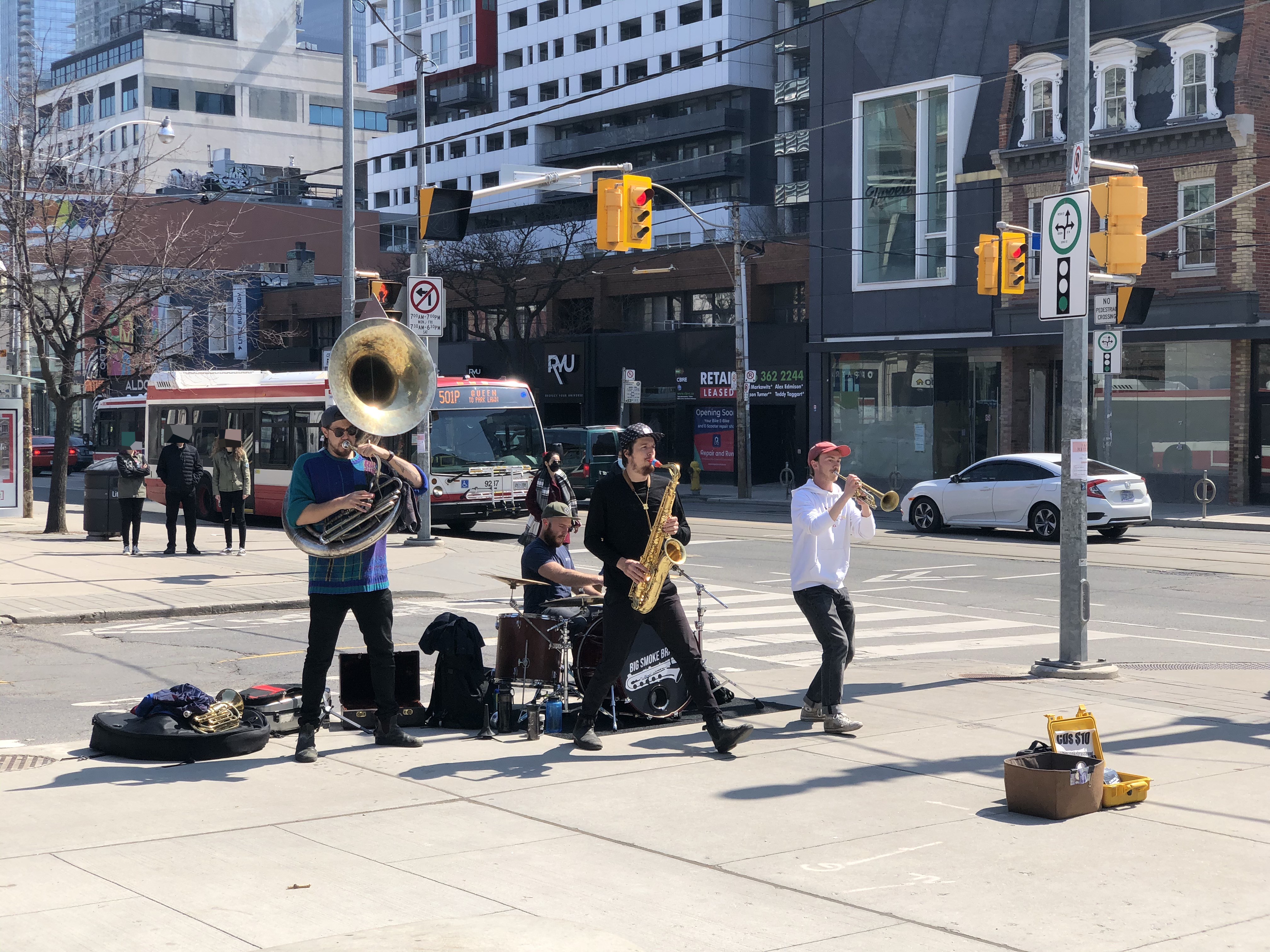 I've already seen much of The Grange by walking through it on my way to other places, especially the AGO, but there were some spots new to me. That included the parklet behind St. Patrick's Market (that building now controlled by the City of Toronto after the private lease was terminated), itself called St. Andrew's Market Square, and only because I decided to take Renfrew Place from John St. to McCaul St instead of the busier Queen St. I walked up McCaul, hung a left on Dundas, and then up Beverley St. to Cecil St., cutting through on Ross St. to College St. (closed partly for emergency road work), then back down Spadina, returning to Cecil and making my way down Huron all the way down to Phoebe. I tracked the walk on Strava:

Though having walked by it dozens of times, the highlight of the walk was still the Ontario College of Art & Design University (which everybody here calls OCAD), and to read from the book about the architectural principles, where I learned that the elevator shaft bears a great deal of the load for the addition. 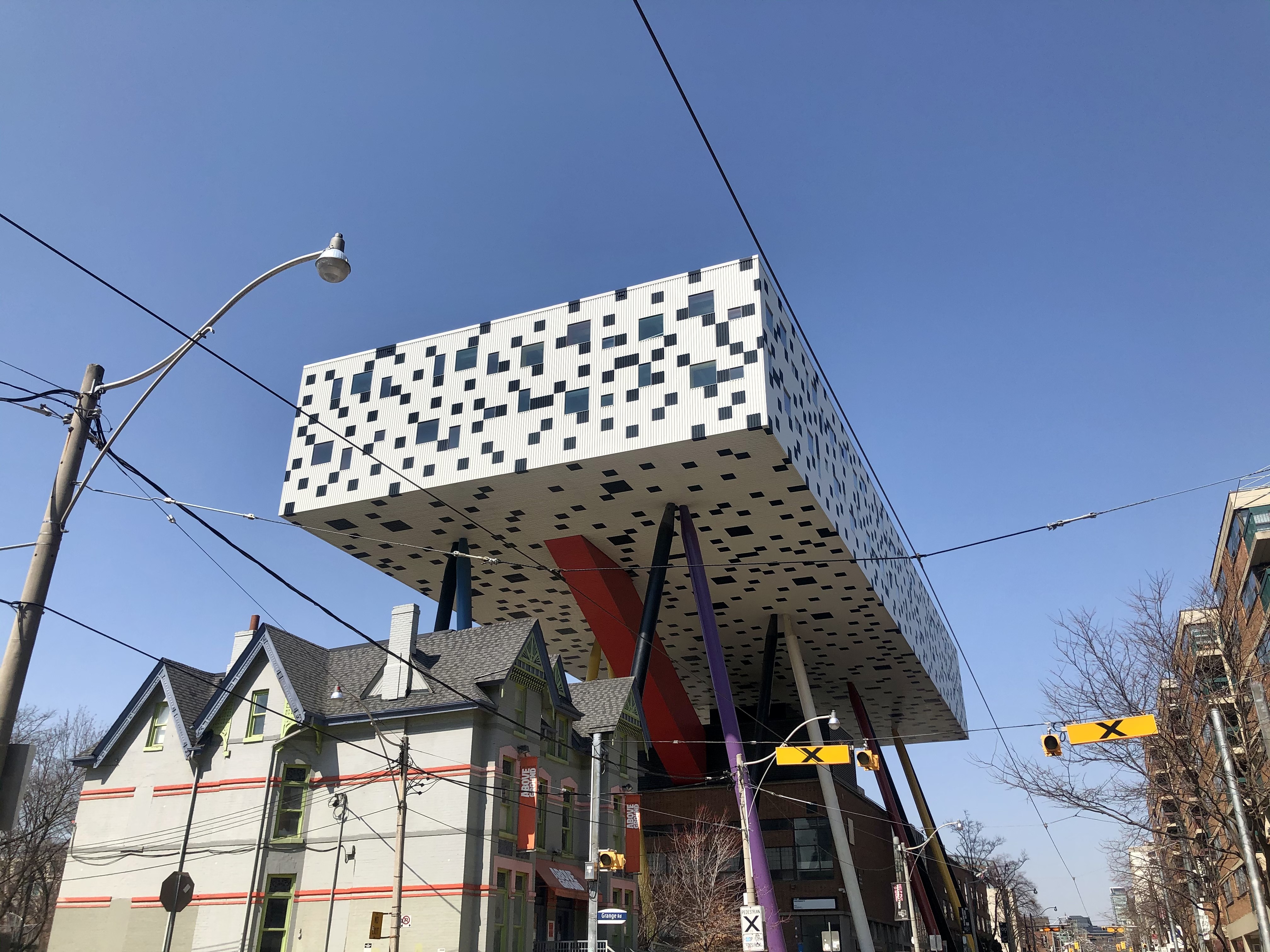 I wanted to go inside the Cecil Community Centre, since the sign was so inviting, but I'm sticking to essential visits to buildings for the time being. 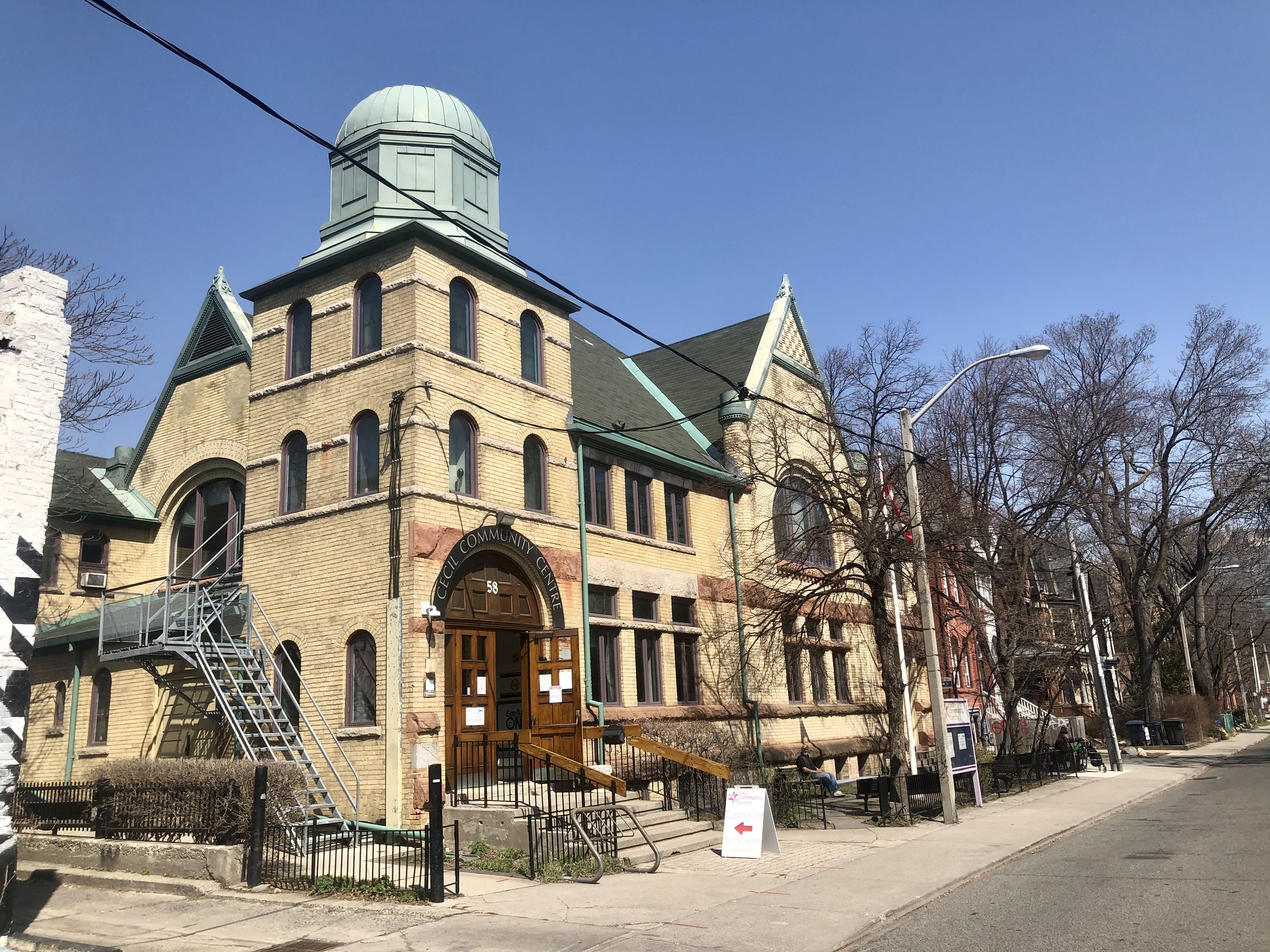 One photo I didn't take was of The Grange itself. I try let people pass by my framing when I'm taking a photo (and, unless they're the subject of the photo, I try to blur their faces). I couldn't this time, as there were two friends sitting on the steps.

I've posted the photos I took as a set on Flickr.