A Year of Sheltering in Place

First, the summary for March: Ontario only recently lifted its “strict stay-at-home order” for Toronto, which most people interpreted as a strong request. Retail shops opened to limited capacity while restaurants still cannot accept dine-in patrons. The vaccination effort in Canada has only really gotten off to a start. While the government had set that expectation, it has been frustrating to see the United States jump out to a 30% to 7% lead as of today, March 13th, though we are told that this week marked the first major delivery of vaccines to provinces. If critics of the Ontario government are to be believed, the provincial authorities had planned on the federal government not delivering on its promise, and thereby blaming them for the ensuing mess. All signs point to that not being the case, with the feds more or less meeting the expectation and municipalities picking up the slack of setting up the infrastructure.

I didn't run much in the last two weeks of Feburary/first two weeks of March due to some achs and pains plus cold weather. I did set out to walk for an hour every Saturday and Sunday with shorter walks during the weekdays.

A Year of Sheltering in Place

My pandemic "anniversary" is today. The February 29th, 2020 headline that helped me realize that COVID-19 was here and a serious threat was the Toronto Star's “The Wayne Gretzky of Viruses” (see below). 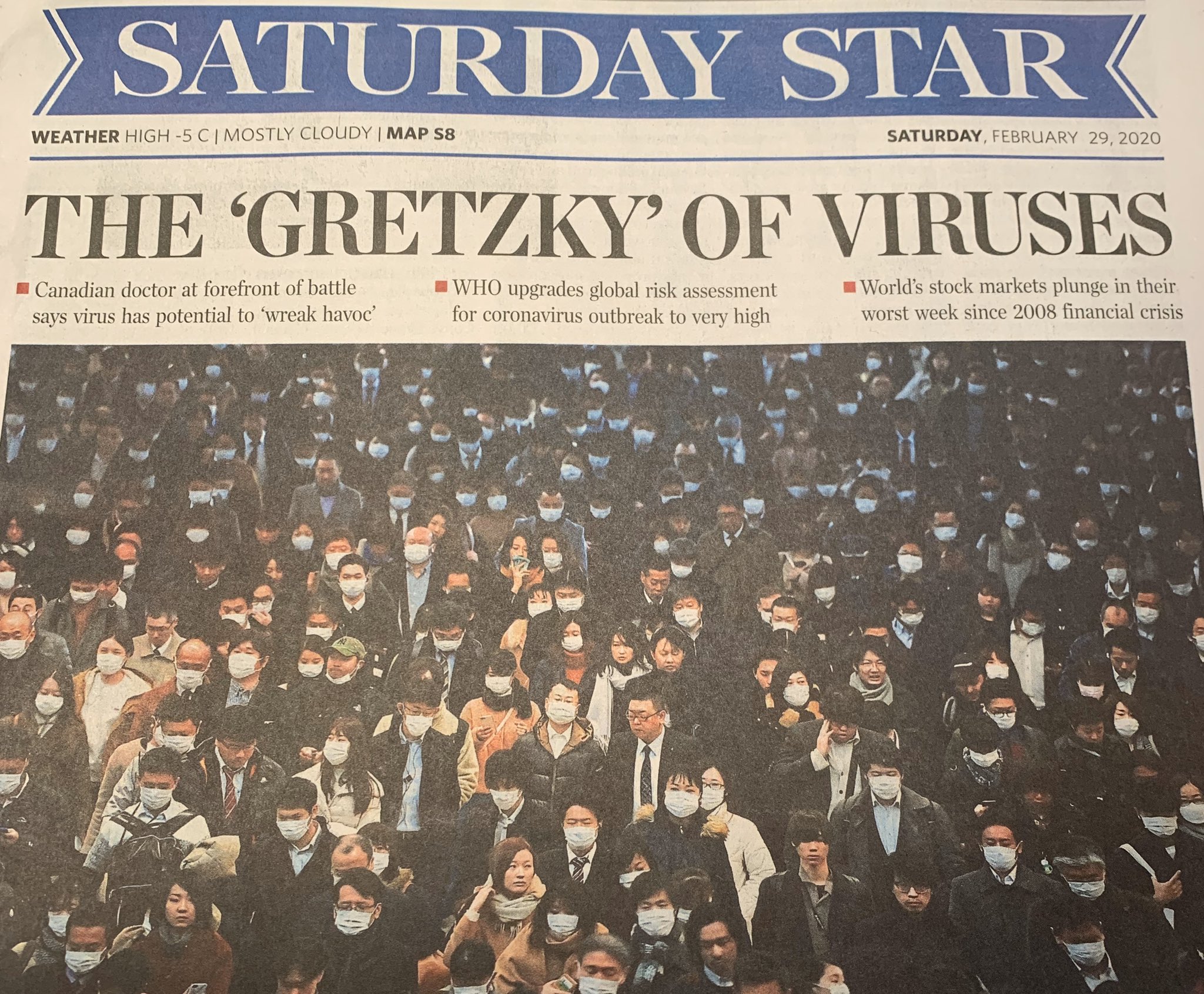 Even so, at work, for the first two weeks of March, we would wash our hands when entering and leaving, and we had the feeling was we were doing enough. I worked from home on Friday, March 13th, as I normally would do so once a week or so. That day the rumours inside the company that they would assess the situation in a week after that, but my direct manager called it right away, urging us to work from home the following Monday. Every month on the 13th of the month, I would write a summary of how I felt and what I did. I've collected them all in once place, in chronological order, at justagwailo.com/sheltering-in-place.

Up until then, I was planning a big trip though the United States. It was to start in Kansas City, to catch a Royals game, visit the Negro League Hall of Fame, and stroll through downtown. Then I would go on to Las Vegas to take in a show (Penn & Teller) and a baseball game, and more or less that’s it. Then on to Portland, OR to visit co-workers and friends, with the possibility of swinging through Vancouver, B.C. on my way home to Toronto. Luckily I didn’t buy any tickets or book any hotels, as airlines in particular struggled to figure out how to compensate travellers who weren’t going on their planned trips.

My last haircut before sheltering in place happened a week before, so I had a couple of good hair months while many people were upset that barber shops and hair salons were closed. I joked to my sister that I was growing my hair out, though I realized this was a good opportunity, as not many people would be interacting with me for a while. I haven't gotten a haircut since. The current plan is to celebrate receiving a vaccination by waiting a few weeks and getting my mane shorn.

Things that have kept me sane:

I had time to reflect on the things that were shut down that I missed, and what the pandemic revealed to be the reality:

I didn't come out of 2020 stronger, nor did many people I know. It was a downgrade of a year. There were signs of hope at the start of the pandemic and they've only grown in number. 2021 looks to be quite the improvement over the last one.