Park This! Inspirational and Effective Solutions for Bike Parking at the Vancouver Museum

Last night I had the opportunity to visit the Vancouver Museum (or, Museum of Vancouver) to attend a lecture featuring three presentations about bicycle parking. Titled "Park This! Inspirational and Effective Solutions for Bike Parking" short presentations first showed implementations worldwide, then the second more generally addressed bike parking as a public issue, and the third discussed Vancouver's experience specifically.

The Vancouver Public Space Network (VPSN) took photos of the event and the subsequent Velo-City museum tour. As I sarcastically predicted, bike parking was inadequate for the event (1, 2, 3, 4, 5, 6).

Richard Campbell presented first, showing and telling about other cities' ideas to make it easy for cyclists to leave their bikes behind while they go about their business. Considerations for good bike parking in cities are, he says: length of stay, cost, available space, demand, customers, and security. 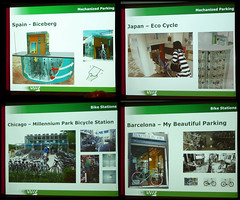 Rough notes on the cities he covered, each of them, in the presentation, each illustrated by a photo:

Adrian Witte presented next, discussing the issues surrounding bike parking generally. 20,000 bike trips in 1994 increased to about 55,000 in 2006, which still only accounts for 3.5% trips of all modes in the city. Adrian asked if road builders think of parking, why can't bike path builders?

How can bike parking be used to increased cycling participation?

back to basics: good design

Valet parking checks all the boxes.

integrate with other modes

Summarizing, Adrian said that tried and true design principles, embracing technology, integrating with other modes, trying different angles to solve the problem help in establishing a bike parking system in a city. 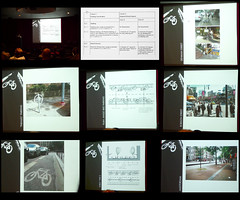 Stephanie Doerksen of VIA Architecture (also of the VPSN) brought the to Vancouver specifically, observing that bike parking made for cycle-friendly streetscapes. In 1995, the parking bylaw amendment required bike parking to new developments. In 1999 the city created a comprehensive biking plan, making more bike parking available in commercial neighbourhoods. In 2009, there's still a shortage. She mentioned VPSN's visual audit of bicycle parking, and her photos showed bikes locked to objects other than those intended for bike parking.

Stephanie noted that the city is thinking of replacing parking meters with a different payment system, and that they have the opportunity to replace the physical parking meters with bike parking poles. It would be easy and efficient, not requiring a change to the streetscape. Other ideas include converting a parallel car stall to bike parking, such as on curbs in Portland and angle parking. 12 bike parking spaces, she says, for each car parking space.

At the panel discussion afterwards, the audience and the presenters discussed bike parking around Denman and Robson. A question arose about parking for bikes with trailers for groceries & kids. Another audience member remarked that bike parking not a sexy issue: bike stations have been successful, but take up space. Later, an audience member made the connection between bike racks and street furniture: they can lead to a sense of order to the street, but Vancouver does not seem to have uniformity like in Toronto.