Getting to Maybe: How the World Is Changed by Frances Westley, Brenda Zimmerman, and Michael Quinn Patton

When shopping for Christmas gifts at the Laughing Oyster bookstore in Courtenay, I came across a book whose subtitle, or rather, its very long and prominent description, spoke to me. Ever since befriending people who were able to project an attitude that they can change the world—or at least their world—for the better, I've started to believe the same thing. This belief came in direct conflict with my long-held attitude that I was just one person, that I neither had the energy nor the inclination to find the cause that I couldn't not join, the something so undeniably wrong that I couldn't not do something about. Everything seems taken care of. Global warming? Somebody's working on that. Sexism? A whole cadre of activists are on it. Hate, poverty, racism? All issues that I can outsource my conscience to someone else because these were so obviously problems that there were enough people on the job. 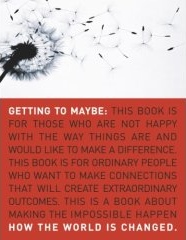 Enter Getting To Maybe: How the World Is Changed by Frances Westley, Brenda Zimmerman and Michael Quinn Patton. The "subtitle", in text as big as the title, that grabbed my attention reads: “This book is for those who are not happy with the way things are and would like to make a difference. This book is for ordinary people who want to make connections that will create extraordinary outcomes. This is a book about making the impossible happen.” I showed the book to Karen, my agent of change, who knew my struggle with cynicism and with trying to find my passion. She offered to buy it for me. She thought this might be something to knock me into action, whatever that might be. She was right, but it won't knock me into action soon.

Westley, Zimmerman and Patton describe the people who are the forces behind social change as "social innovators". I see social innovators all around me, but I yet don't have the confidence to describe myself as one. (Yet: one person, who will remain nameless, has pointed out that I'm at the top of a pyramid, and whether or not I agree with the idea that I'm "over" people, I concede that there are people who listen to me and take me seriously during the times I want to be taken seriously, and that my influence with them is nonzero.) The authors challenge the mindset that problems have simple explanations and simple solutions, and argue that embracing complexity and, most difficult for me, ambiguity lead to the change that social innovators seek. They also challenge the notion that the best social innovators are the strong personalities, and argue that they are rather people from all dispositions that felt a calling. They could not not act. Even if the social innovators knew for a fact that they wouldn't solve the problems in their lifetime, or even ever if they lived forever, they could not stand idly by while it was happening. "Not on my watch", Ulysses Seal of the Conservation Breeding Specialist Group said to himself. Write the authors: “that watch will last his lifetime, but by thinking about his mission in this way, he makes it human-scaled—manageable enough to carry without succumbing to despair.”

The authors recommend constant evaluation during implementation and finding moments to sit still, to see where social innovators are and to note changes in the social landscape and adjust. Citing the case of PLAN (Planned Lifetime Advocacy Networks) and their struggle to scale their network out, the authors suggest that not every movement can be replicable, or at least not quickly, despite pressures to do so. Other case studies offer more lessons. The case of Opportunities 2000 in Waterloo, Ontario suggested that even though the implementors believed they had only a small but measurable effect, theirs was the motivating force. Others found success through their failure: Roméo Dallaire, a Canadian hero if there ever was one, could not prevent a genocide in Rwanda, and lost everything after he retired. His current stature amongst Canadians has vindicated him, and he finds success in speaking tours around the country. (His stature amongst Belgians is another story.) MADD (Mothers Against Drunk Driving), Bob Geldof, and other cases illustrate the calling, the struggles, the failures, and the changing landscapes social innovators face when making the change they must make.

The authors tend to repeat their stories for effect, and sometimes showcase overtly political motives (as opponents of the war in Iraq and President Bush), and their approach might be a tough sell in an age of one-liners and easy solutions. Despite that and not being able to identify with many of the cases presented, I found the book inspiring. Karen, unwittingly or not, bought this not for the current me, but rather the future me. The me who lets the ideas and stories in the book rattle around in his brain for a little while and waits for the forces that cause me to find my calling align. Or, as the chapter title has it, for hope and history to rhyme. They haven't yet, and they will. After having read this book, I'm better prepared for when they do.

Richard, Interesting. You'll call me crazy, but ever since I read your blog for the first time (and now after having met you in person), I had always had the impression that you were one of those people who came to this world to effect change, and to make this world a better place. I still think that way. This sounds like a good book. Have you read any of the work of Victor Frankl (whose logotherapy book, The Man in Search of Meaning, is one of the best books I've ever read in my life). Keep up the good work :)
Submitted by Raul on Mon, 2008-02-11 00:22

I'll keep my eye out for it,

I'll keep my eye out for it, Raul. I don't have a vision yet of what a better world looks like, though it's getting there. My search for a renewed sense of wonder about the world will help, and I'm more open to hearing about the directions life took people than I was before this year, in order to find inspiration.
Submitted by Richard on Mon, 2008-02-11 22:01

Speaking of a renewed sense

Speaking of a renewed sense of wonder, do you have a child? It is amazing to see their natural sense of wonder and delight at the world. It renews your own.
Submitted by Anonymous on Thu, 2008-02-21 22:34

I do not have a child. I

I do not have a child. I agree with the sentiment, though. Reading about people in complete awe of their young child and listening to children's question (especially the question "why?") reminds me what it's like to have that perspective.
Submitted by Richard on Thu, 2008-02-21 22:43