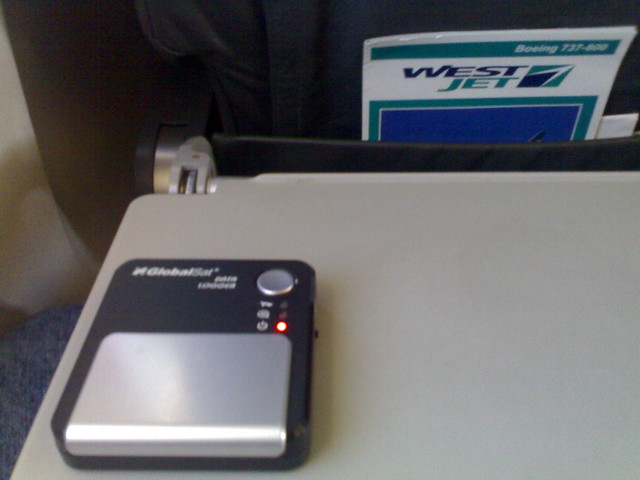 It took readings while I was on the plane, but evidently GPSPhotoLinker couldn't match up the photos with the locations it recorded.

It should work, did you get a position fix when you were in the plane on the ground first? Once it gets underway I think it's hard if it doesn't have a good initial fix. Did you get good altitude data? You should be able to plot it in Google Earth at least.

I believe this was right around the time of daylight savings switch over, which my computer did but the GPS unit didn't. Also, on one of the flight's legs, I dropped it, and it lost the position fix. At least I know that it works, and nobody on WestJet either noticed that there was a black device with a blinking light, or they knew what it was and didn't care.

That was one of the articles I read that made me think it was okay to try it. Thanks for reminding me about it!

Your GPS doesn't know anything about daylight savings time, it's always on GPS time. Talking about dropping it is funny - to get a fix at takeoff, since we can't have the trays down, I put it on my leg... but the DG-100 is smooth plastic and slides right off. This happened to me not once, but twice, on two different flights (you think I'd learn my lesson). Fell right down behind my seat. The guy behind me was like "what's this thing?" The Qstarz BT-Q1000 is much better for this since it has a rubberized bottom that doesn't slide like that.

The only time any of the flight staff have asked me about my little boxes with flashing lights is when I had the DG-100 plugged into my laptop to recharge it (ran out of battery power half-way over the Atlantic). I think they're trained to ask about anything plugged into a laptop as a peripheral. I told them it was a GPS and they came back later and told me it was fine.

Thanks for the info, Richard. I did a similar thing on takeoff, except I held it up close to the window.

I used this photo to adorn my blog post on getting the DG-100 working on my Mac.