Quoted in The Globe and Mail about the OK Button 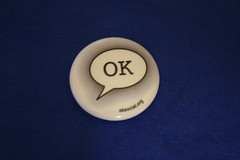 In Friday's edition of The Globe and Mail, Canada's oldest national newspaper, I was interviewed and quoted about the OK Button, a social experiment in which wearers signal that it's okay to strike up a conversation with them. I'm reported to have said something like the following: "[I wear the button] to keep myself accountable when people do want to talk to me." After growing up in Courtenay, B.C., "I'm still used to giving people a signal on the street that acknowledges that they exist." The story appeared in the second last page of the entire paper (not just the front section), and can be read online, at least for the time being. Vancouver blogger Lesli has a copy of the article as well as some commentary about the OK button: “I don't think buttons or a capitalist scheme are necessarly the answer, but perhaps we've come to the part where neighbourliness and smiling require a viral marketing campaign?” I'm pretty sure I heard about the OK Button through Djun. The timestamp on his post is later than I remember, but the earliest I documented having a button was January 7th, 2007.

Published by Richard on September 8th, 2007

We need to get some of those

I ran away from Ottawa and