I saw this first at Miss604, Roland took a photo of the article from The Vancouver Courier and a photo of the Google search, but apparently officials at what was, until this month, formally known as the Greater Vancouver Regional District and now known as Metro Vancouver are upset that they're not at the top of results in the Google search engine. The screenshot that appears in The Courier shows, at the bottom, two links to Urban Vancouver, but the article doesn't mention us by name. Their "webmaster" has recommended adding META tags to the site's HTML, when others like myself might recommend making the site a little more dynamic with interesting content so that we will link to it, or provide an RSS feed so we (Urban Vancouver) can syndicate the content and automatically link directly back to their site every time they post a new story. The algorithm Google uses to determine ranking might be 'arcane', but it's thoroughly and continuously being reverse-engineered. Besides, don't we all know that Wikipedia entries tend to dominate these days anyway and this is likely to be the case for 'Metro Vancouver' as well? 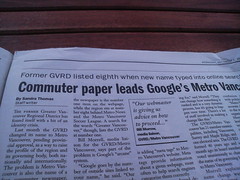 Roland did the search this morning, and confirmed that "Metro Vancouver" shows Metro News as the #1 result, with Urban Vancouver in the top 10 before the official Metro Vancouver website, which redirects to gvrd.bc.ca. (If you change the brand, wouldn't you normally redirect from the old domain to the new one, not the new one to the old?) I created a fun poll about whether people liked the name Metro Vancouver, though it didn't make it higher than our special series on the new Vancouver news daily.

Search engine ranking matters because rank confers authority. Urban Vancouver gets a couple of phone calls a week from people who ask about this and that because we're in the top 10 for whatever they're looking for. I'm sure way more people search for "Vancouver" than "Metro Vancouver", and that will always be true. Besides, I still call the region "Vancouver" or "the Lower Mainland" and people from outside and inside the region get the idea.

Published by Richard on September 6th, 2007