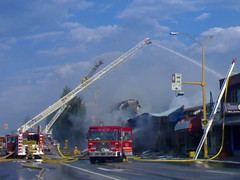 The fire alarm of my apartment building—technically the sister building of the building I live in—went off, waking me up at 1 AM.  My window was wide open, so the smell of smoke filled my bedroom.  Looking across the street over the new condominiums, I saw a huge plume of smoke.  "Oh no," I thought, "Safeway's burning".  Walking a block south, I found instead that once a favourite hangout for me and my friends, Hastings Bowl, was in flames.

Over a year ago, heavy snow collapsed the roof of the building, forcing out some of the busineses below, such as the dollar store whose owner would daily sweep the street before opening.  Haven't heard what caused the fire, but CBC Radio reported that the building had been squatted from time to time.

My regular camera is in the Philippines documenting more compelling scenery, so the photos I did take with my cameraphone show little.  This morning, at least 7 hours after the fire started, it continued to smolder.  My Nokia N70 was able capture firefighters continuing to fight the smoldering blaze.  I've uploaded the one that turned out the best here to NowPublic, but I'll point to my set on Flickr for the rest.

I can't help but wonder if

One can only hope.