A Welcome Change From Urban Drudgery

This morning, instead of working from home as I had promised, I ducked out to ride around my neighbourhood for a half hour before the deluge predicted by Claire Martin. A half an hour turned into an hour and a half, and took the route that I decided will be the route to work. Mostly downhill, and not scary downhill like Union which levels off just as it crosses with Boundary. And under the Second Narrows Bridge. And next to train tracks and the Cascadia terminal. And next to New Brighton Park, which you have to go underneath the train tracks to get to. And which forces you to turn left onto Lakewood Drive then turn right onto Adanac, which is a downside, since it takes me briefly away from work. 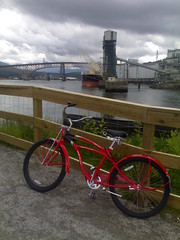 A woman walking her dogs said hi and noted that the bike I was riding was part of the Vancity Bike Share, which she had read about in the newspaper. We have a brief conversation about it, and then ran into her on the way back home. (It's not likely that she notice I was also wearing my OK button as well, but it keeps me accountable for the times I don't want to talk to friendly strangers.) The bikes are indeed identifiable, so I was wise to call this social biking. I'm not expecting to make any friends or business contacts through it, so far saying hello to fellow trail walkers and bikers sure beats heads-down and fearing talking to those we don't know. Having grown up in a small town, I'm used to at least acknowledging others' presence on the street, so this is a welcome change from urban drudgery.