Spoke at Nothern Voice, Impressions of the First Half of the Conference

My session on Blogging 101 went okay: I didn't demonstrate nearly as much as I wanted to (and when I did demonstrate how to blog, I did it at the end rather than the beginning as planned), but I was pleased with the amount and type of questions asked. For next time:

I wanted to do the Brian Lamb thing and take a picture of the audience and post it. It would have made a good demonstration of posting photos to Flickr, but also, it turns out, out of the scope due to time. That tells me that not only can we do Blogging 101 sessions for a while to come—or, more likely, Blogging 201, which is how to do more than post but rather promote and do it really well—but Social Web 101, or rather, how to strategically use the tools I'm very familiar with to promote whatever it is you're interested in promoting (yourself, your company, or interesting and pertinent ideas). 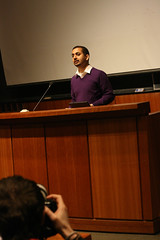 While we're speaking about people using the tools, Northern Voice, not to mention other conferences like it, are great demonstrations of people documenting an event in real time. I wish I could do it better, that is, take photos faster and publish them faster, but since other people do it well already then I don't feel the rush. I'll post them on Sunday. Says the guy who's writing about the first half of the day before the first half of the day is over: Anil Dash's speech was an interesting, different take on why blogging is important and meaningful, I learned a little more about the subject while holding a session on it, and Travis Smith, a journalist in his own right, had a fair and balanced approach to the new and emerging citizen journalism.

I enjoyed your presentation.

Gene: thanks for the