Over the weekend, I went on my first solo snowshoeing expedition. That makes it sound more significant that it really was: all I did was take the bus to Phibbs Station, take a "shuttle" bus—formerly a school bus—to Seymour Mountain for a couple hours of actual snowshoeing. The conditions were not great at all: it was raining on the mountain, which made for slushy and slippery trails. I fell a few times on the steepest slopes, at least once losing a snowshoe. Almost Sisyphean, I finally made it up, then, decided to give up on another slope, changed my mind and climbed it, then encountered another one, decided to give up, changed my mind, fell again, and decided once and for all to slide pretty much all the way down to the lodge. I proceeded to eat a delicious if sloppy chili dog while I waited two hours for the next "shuttle" down the mountain. 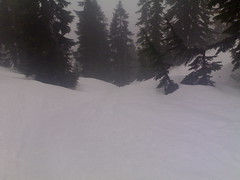 I learned a bunch, like: where "shuttle" picks up passengers (at the end of Oxford St. closest to Phibbs Exchange, not the end farthest from it); how to tighten my newly purchased Yukon snowshoes and untighten them (would have been better off learning that before going up the mountain); and that snowshoeing alone isn't very much fun (though everybody I pass by says Hi, just like back in my hometown). I brought my old Canon Powershot but didn't take any photos with it, instead taking only a couple of shots with my phone (see left). Tempted though I was to bring my Rebel XTi, that's not an investment I'm prepared to lose because I wanted to bum slide down just one more hill.

Other things that happened that day: a lady asked me why I took a photo of the bus stop sign at Phibbs Exchange, and I didn't have a really good answer for her other than that I'm a transit enthusiast. Also, I read a couple of chapters from Wikinomics: How Mass Collaboration Changes Everything, by Don Tapscott and Anthony D. Williams, which so far I haven't learned much from but am enjoying as a popularization of Web 2.0. And I hear there was a football game on that day, but I decided to spend most of the day outdoors.

Published by Richard on February 5th, 2007