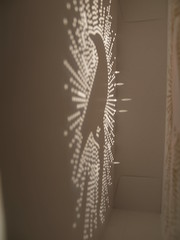 This evening I went to Workspace in Gastown, a historic neighbourhood in Vancouver, to see Alex Steffen give a brief talk and signing for the book he edited, Worldchanging: A User's Guide For the 21st Century. Containing contributions from several dozen writers and photographers, the book, beautifully designed by Sagmeister Inc. (the book's cover advertises both this and that former Vice President Al Gore wrote a forward), outlines the problems this planet faces in the next decade or so and innovative solutions to those problems.

The book wears its ideology on its sleeve, or rather its slip cover, featuring not just a photo of a bird standing on a branch, but die cut holes so that, as Steffen pointed out, will make its mark on the book itself. The book, in other words, will evolve (change!) into something as the reader takes it out and puts it back. The photo above, by Kit Seeborg, shows the inside of the cover, while another view shows the outside. I asked Steffen if the book was intended to be a reference book or a coffee table book, and he answered that it wasn't intended to be read cover to cover, but looked at from time to time for ideas on how to change the world and holistically address the world's problems.

I have a set of photos from the event on Flickr. Nothing special, just photos of Steffen holding the book and of stacks for sale. I will have to reserve some thoughts about the book until I've given it more attention and consideration.

Published by Richard on November 5th, 2006